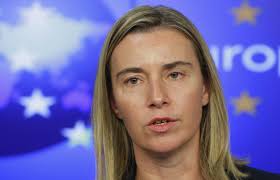 core May 22, 2017 Knowledge and Technology Leave a comment 1 Views

EU foreign policy chief Federica Mogherini on Saturday extended greetings to President Hassan Rouhani on his reelection. stressing that the European Union is ready to develop mutual cooperation.
Rouhani secured an emphatic reelection on Friday by garnering 57% of the vote.   The EU is ready to continue work for full JCPOA implementation. bilateral engagement and regional peace. she said in a tweet. referring to the 2015 nuclear deal between Tehran and major powers by its official title. the Joint Comprehensive Plan of Action.
She also tweeted. Iranians passionately took part in the political life of their country. I congratulate President Hassan Rouhani for the strong mandate he received.
Mogherini had said on Thursday the bloc was closely watching Iran`s presidential election. saying. It is an election that we look at very closely … because Iran is an important player in the region.