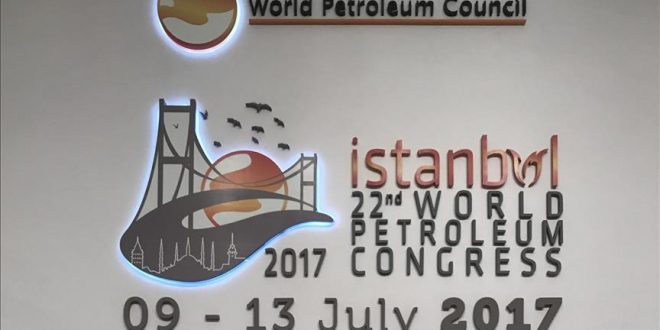 Mayor of Houston. the city to host next Congress (WPC)`&gt.World Petroleum Congress in 2020. says Istanbul congress `set the bar very high`
The Mayor of Houston. the U.S. city that will host the next Congress (WPC)`&gt.World Petroleum Congress praised the congress in Istanbul and invited representatives of the oil industry to participate in the next 2020 conference in his city.
“I want to thank Turkey and all of those affiliated in hosting this particular congress in 2017.“ Sylvester Turner said on the sidelines of the Congress (WPC)`&gt.World Petroleum Congress. of which Anadolu Agency is the global communication partner.
“They have been a very gracious host. the hospitality has simply been terrific.“ Turner said.
“They set the bar very high for the series in Houston.“
Turner elaborated on Houston`s oil and gas industry.
“Houston is a major global center for the energy industry. Currently. there are more than 4.800 oil and gas companies in the greater Houston area.
“These Houston-based companies generated 40 percent of the petrochemical capacity of the United States and employed one-third of our country’s oil and gas workers.“ he explained.
When asked about the U.S. travel ban. which is currently affecting visitors from Iran. Libya. Somalia. Sudan. Syria and Yemen. Turner said. `We will work very hard between now and then to ensure that people will not have any significant problem.“
Dubbed as the “Olympics of Petroleum“. the triennial congress gathered top managers of the leading oil and gas companies in Istanbul.
High-level executives from leading energy companies and up to 50 energy ministers attended the Congress. under the theme. Bridges to our Energy Future.

Previous South Korea`s Iran Crude Imports for June Up 10.5 Percent Year-On-Year
Next Kuwait: Not About Time to Curb Oil Production in Libya. Nigeria