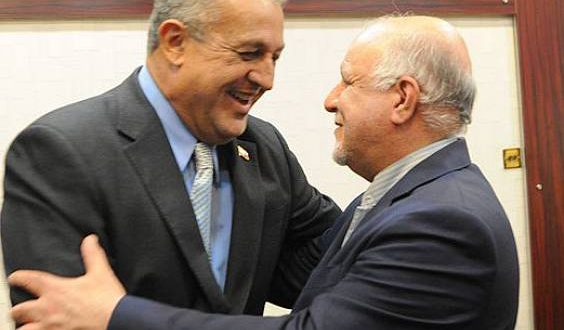 Oil ministers of Iran and Venezuela met in Tehran to discuss the implementation of an OPEC agreement to reduce output and the current circumstances in the global oil market.
Iranian Oil Minister Bijan Namdar Zanganeh and his Venezuelan counterpart Eulogio del Pino held the meeting in Tehran on Wednesday.
Speaking to reporters after the meeting. Zanganeh said their talks mainly focused on Iran-Venezuela cooperation and the current conditions surrounding the global crude market.
Another issue discussed in the meeting. he added. was the possibility of extending an agreement between the OPEC (Organization of the Petroleum Exporting Countries) members to reduce oil output by June 2018.
Zanganeh further expressed satisfaction with the degree of commitment to the OPEC output cut deal. saying the participants have remained committed to the agreement by 98 percent over the past eight months.
Iran is ready for any measure contributing to stability in the oil market. the minister added. saying more talks on the extension of the OPEC output cut deal would be held during the upcoming ministerial meeting of the Gas Exporting Countries Forum (GECF) in Moscow.
OPEC and other major producers. including Russia. agreed at the end of 2016 to reduce their combined oil output by almost 1.8 million barrels per day (bpd) to help rebalance the market.
In May. they agreed to extend that agreement until March of 2018.
Russia and Saudi Arabia have discussed extending the output cut. but no specific decisions have been made. the TASS news agency reported last week.