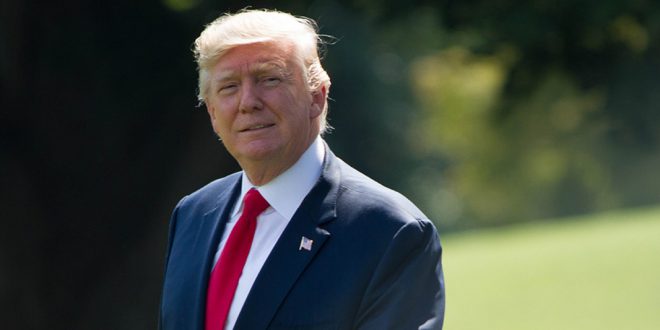 No doubt about it. US President Donald Trump is now gearing up in the Iran demonization department and increasingly sounding like a nuclear ventriloquist whose voice of criticism of the Iran deal rings hollow. substituting slogans for a rational discourse.
A week after his Defense Secretary James Matties told the US Senate that the Iran deal is in US’s national interest. Trump is now contradicting Mattis and a number of other influential members of his administration. including the Secretary of State Rex Tillerson. by claiming otherwise. Trump’s reported readiness to decertify the Iran deal next week and to brand it as contrary to US national interest will. of course. trigger a rainstorm of controversy. in light of the strong defense of the deal by the other five countries that authored the deal after marathon negotiations.
Upping the ante against the deal by raising the volume of verbiage against it. but scrapping the deal by some vague references to the US national interest is quite another.
The deal is pretty much certified as upholding by Iran by the International Atomic Energy Agency (IAEA). which in turn makes it nearly impossible for Trump to claim that Iran is in technical violation. Calling it a bad deal and. at the same time. blaming Iran for violating the “spirit“ of the agreement is also contradictory. the latter sounding as if Trump actually respects it as sound and defensible. But. he cannot have his cake and eat it too. as the saying goes. and the chips must fall down one way or another.
The problem with resorting to the national interest argument is that it is largely subjective and subject to varying interpretations. given the mix of national security. economic. and other interests involved. whereas what is needed for a sober assessment of the nuclear deal is the objective criteria set by the IAEA. in other words. international norms that are used as the standard for making sound assessment of the subject matter. that is. the level and scope of Iran’s compliance with an international agreement that has been blessed and authorized by the UN Security Council.
As a result. Iran is within its rights to complain to the UN Security Council against the US for dishonoring Resolution 2231 that the US fully endorsed two years ago. No amount of diplomatic back paddling by Trump. who lacks international credibility after so many missteps including his warmongering speech at the UN last month. will suffice to convince the international community that he is on the right track with respect to Iran.
US’ European allies. including England and Germany. have forcefully defended the Iran deal and would be hard pressed by their public if they choose to follow Trump’s new track against Iran. The European Union is also a chief supporter of the deal and it is quite unlikely that the EU will make any sudden turnabout on a deal it has praised on numerous occasions. US will. therefore. be inclined in the days to come toward a pathetic situation of acting alone on Iran. thus adding to the US administration’s pile of international problems. in other words a recipe for disaster.