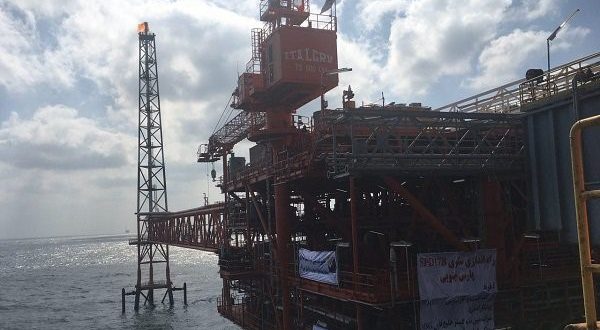 Phase 12 of the supergiant South Pars Gas Field produced 11.6 million barrels of gas condensates during March 21-September 22.
Caretaker of Refinery 9 of South Pars Gas Complex Mohammad Mahdi Hashemi said the refinery. as Iran`s biggest gas refinery. processed over 10.7 billion cubic meters of natural gas during the period. Shana reported.
He said the refinery also produced 50.000 tons of aggregated sulfur during the six months. indicating a growth of 20 percent compared to the figure for the same time span last year.
The official said that Refinery 9 of South Pars Gas Complex has an 11-percent share in the country`s gas production.
In September. Iran announced plans to attract €500 million in foreign investments for projects to collect flare gas in its South Pars energy hub.
The announcement was made only days after the country awarded a deal worth €42 million to a consortium led by France`s Sofregaz for a similar project for the treatment plant of South Pars phases 2 and 3.
`Reducing industrial pollutants is important and has been highlighted in Iran`s upstream documents and is a key concern of officials.` Mohammad Meshkin-Fam. the managing director of Pars Oil and Gas Company (POGC). was quoted by the media as saying.
`The deal with Sofregaz is meant for the same purpose.` Meshkin-Fam said.
He hoped this would be the starting point for further agreements at all 13 treatment plants in South Pars. underlining that no natural gas should be flared in the energy hub.
Based on the agreement. the French company would cooperate with Iran`s Samin Sazeh over the project.
POGC chief further emphasized that treatment plants in South Pars had been designed to avoid flaring excess natural gas from the fields.
However. he said years of sanctions against the country had undermined the performance of the plants.
Sofregaz will be the second French company to win a deal in Iran`s energy sector. In early July. Total signed an agreement with the National Iranian Oil Company (NIOC) to develop Iran`s South Pars Phase 11. Total is expected to invest around $5 billion in the project which it will implement together with CNPC of China and Petropars of Iran.