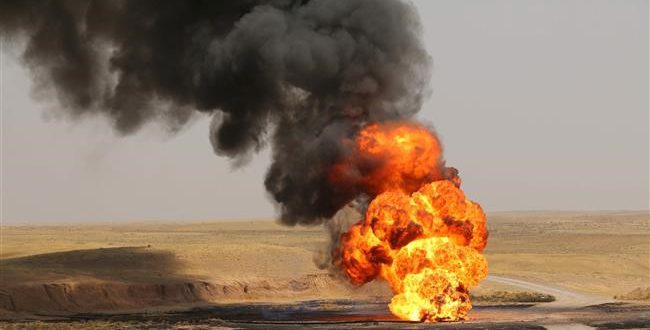 Oil flowed normally from fields in northern Iraq even as government troops and allied militias faced off with forces from the independence-seeking Kurdish region on the outskirts of the disputed area of Kirkuk.
Exports of about 600.000 barrels a day of crude from Kirkuk’s oil fields and from deposits inside the adjacent Kurdish region continued as usual through a Kurd-controlled pipeline to Turkey. according to a person familiar with the matter. asking not to be identified because the information is private. The shipments from Kirkuk combine crude pumped by Iraq’s state-owned North Oil Co. and by the Kurdistan Regional Government. and both flows are normal. Kirkuk Governor Najmaddin Kareem said Sunday.
Kirkuk. home to Iraq’s oldest-producing oil fields. has emerged as a potential flashpoint of conflict between the country’s federal government in Baghdad and the semi-autonomous KRG. Iraq is the second-largest OPEC producer. pumping most of its 4.47 million barrels a day from fields in the south and shipping it from the Persian Gulf port of Basra. But with Iraq supplying about 14 percent of total production from the Organization of Petroleum Exporting Countries. a conflict centered in the country’s north could have an immediate impact on oil markets.
Heightened Threat
“This heightens the threat of intermittent disruptions to oil supplies.“ said Jaafar Altaie. managing director of Abu Dhabi-based consultant Manaar Group. Oil prices could jump by $2 to $3 a barrel on any halts to exports be caused by fighting between KRG and federal government forces or by Turkey cutting off the pipeline from northern Iraq. he said.
The latest dispute between Baghdad and the KRG over the Kirkuk area flared after their combined forces routed Islamic State militants from most of northern Iraq earlier this year. It intensified after the KRG held a referendum on independence from Iraq on Sept. 25. The KRG included Kirkuk in the referendum. prompting Baghdad to deploy troops closer to Kurdish positions in the area. Benchmark Brent crude ended the week 1.6 percent higher at $57.17 a barrel.
Both the central government and the Kurds share an interest in keeping oil flowing from northern Iraq. so markets would probably calm down quickly after any interruption in these exports. according to Manaar’s Altaie. “I don’t see a sustainable disruption in supply of oil from Iraq’s northern fields.“ he said.
Iraq is seeking to boost its oil-production capacity after decades of sanctions. conflict. terrorism and. most recently. the occupation of territory in its north and west by Islamic State. Kurdish forces occupied much of Kirkuk province in June 2014 after Iraqi government troops retreated ahead of the advancing militants. Baghdad refuses to recognize Kurdish control of the area. where ethnic Arabs. Kurds and Turkmen all have overlapping territorial claims.
The federal government has sent troops into areas around Kirkuk and soldiers haven’t entered the city boundaries. Kareem. the governor. said. The Iraqi parliament has voted to dismiss Kareem over the independence vote. according to state-run Iraqiya news.
Baghdad is demanding that Kurdish forces hand over oil fields. an air base and other infrastructure in Kirkuk. Ahmed Al-Askari. head of the energy committee at the Kirkuk provincial council. said Sunday by phone.
Turkey. concerned that a declaration of independence by Iraq’s Kurds could spur the secessionist movement among its own Kurdish minority. threatened this month to cut off exports from the KRG-run pipeline via its own territory to the Mediterranean port of Ceyhan.