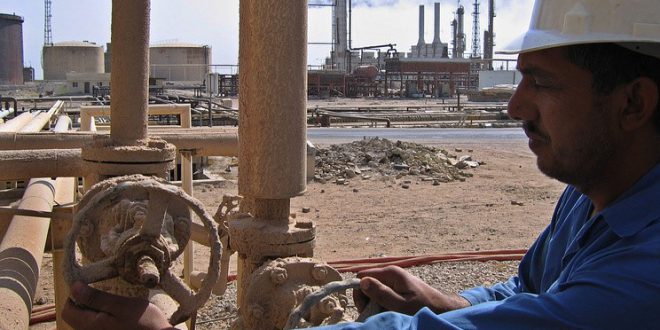 Baghdad’s talks with Turkey about ramping up oil exports from northern Iraq. including the semi-autonomous Kurdish region. is complicated by a $4 billion debt that the Kurds owe to Turkey. according to Iraq’s oil minister.
Iraq is seeking an agreement with Turkey for all exports from the north. including the Kurdish region and the disputed province of Kirkuk. through a pipeline currently operated by the Kurds. Jabbar al-Luaibi told reporters in Baghdad. Iraq’s state-run Oil Marketing Co.. known as SOMO. would control all exports under the agreement. he said.
“The problem is that Turkey said they have debts with the Kurdish region amounting to $4 billion and Turkey is demanding their payment.“ al-Luaibi said Thursday at a news conference. Iraq’s central government takes no responsibility for the Kurdish debt. he said.
Iraq expects to resume oil exports from Kirkuk province later this month. more than two weeks after the shipments were halted due to fighting between federal troops and Kurdish fighters. SOMO acting director general. Alaa Alyasri. said at the same conference.
The central government of OPEC’s second-largest producer rejected a Kurdish independence referendum in September. and it deployed troops that captured oil fields in Kirkuk from Kurdish fighters on Oct. 16. The offensive led to a halt in pipeline exports from northern Iraq to Turkey’s port of Ceyhan. The Kurds restarted exporting their own crude on Oct. 30. but shipments from Kirkuk remain halted. Any increase in Iraqi output could put pressure on the Organization of Petroleum Exporting Countries and allied producers as they seek to clear a global glut and support oil prices.
DAMAGED PIPELINE
Exports from Kirkuk are due to restart later this month. and together with Kurdish crude shipments would flow at a rate of about 550.000 bpd. Alyasri said.
Iraq is working to fix an older. central government-run export pipeline to Turkey. and the repairs should take several months. al-Luaibi and Alyasri said. The pipeline was damaged during fighting with Islamic State militants who took over swathes of northern Iraq in 2014.
Iraq asked operating companies to return to the Akkas and Mansouria gas fields. which were recaptured from Islamic State militants a few weeks ago. al-Luaibi said. The government has resumed production at the Qayyara field in Mosul and also at the local refinery there. he said.
Production will resume at the Siniya refinery within days. and Iraq plans also to fix damage to the Salhuddin-2 refinery within the Baiji complex to help it restart within six months. al-Luaibi said. It also plans to rehabilitate Ain Zala oil field in Mosul. he said.
Separately. Iraq is holding talks with Iran to truck 15.000 bpd of Kirkuk crude to Iran’s Kermanshah refinery. Alyasri said.
Iraq has been participating in global output cuts that are due to continue through March. OPEC and other global producers are to meet later this month in Vienna to decide on a possible extension of the curbs. Iraq supports prolonging the cuts by nine months until the end of 2018. al-Luaibi said. Alyasri said the country supports any decision that OPEC would take to support the oil market.