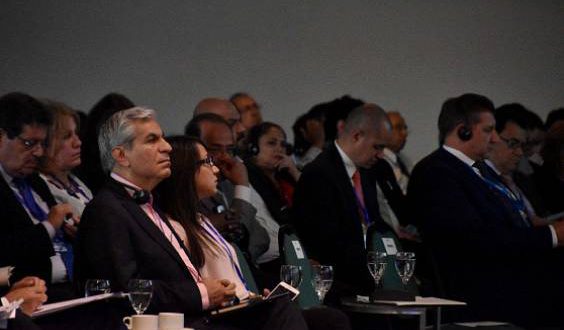 Minister of Energy and Industry. H E Dr Mohammed bin Saleh Al Sada said yesterday that natural gas was the ideal solution to the climate change issue. resulting from the race to meet rising economic standards of living and industrial need of the growing population of this planet. Dr Al Sada was speaking at the First International Gas Seminar of GECF. on the sidelines of the 4th GECF Summit. that will be held tomorrow in Santa Cruz. Bolivia. Addressing the Seminar. held under the theme: “Natural Gas: The Fuel of Choice for Sustainable Development“. Dr Al Sada said that industrial processes and emissions from fossil fuel combustion has created numerous environmental problems. such as greenhouse gas emissions. air pollution. and other harmful gases. The Minister said that using natural gas. unlike other fossil fuels. would be beneficial to the environment. “Natural gas emits virtually no Sulphur oxides. and up to 80 percent less nitrogen oxides than combustion of coal“. he explained. The Minister stated that global gas consumption would increase at the rate of about 2 percent per annum. to over 50 percent by volume in the next two decades. It is becoming the fastest growing fossil fuel. and the centerpiece of the energy equation. It is steadily becoming the fuel of choice across the globe as it supports economic development while adequately addressing environmental concerns. He added that. within the natural gas sector. LNG demand was expected to grow at more than double the rate of Natural Gas. growing from 260 to over 600 Mtpa over the next two decades. Market share of LNG in international gas trade is expected to grow significantly from about one third in 2015 to nearly half by 2035. equaling that of the gas supply by pipeline. The market for LNG is expanding beyond the Power sector to include long-haul road transport and marine sectors as well. In the short term. over the next few years. the demand impetus for LNG will be supported by energy policies favoring gas. structural changes in power markets. and concerns over nuclear power generation. Driven by these factors. LNG is expected to have a strong growth. pushing the total LNG demand to about 314 Mtpa by 2020. In the same period. LNG supply too is set to rise and production capacity is expected to reach 400 Mtpa by 2020. as additional supplies enter the market. Very few new LNG projects are expected to come in the earlier part of the next decade. As a result. the global LNG market will start to tighten. potentially facing a supply shortage by 2025 onwards. This scenario led the State of Qatar. under the visionary guidance of the Emir HH Sheikh Tamim bin Hamad Al Thani. to take the wise decision to increase Qatar’s LNG production from 77 to 100 million tons per annum. to be operational by 2024. The State of Qatar would hence remain at the forefront of countries producing and supplying this clean form of energy to the corners of the globe. The First International Gas Seminar of GECF aims to bring together world experts and stakeholders in the Gas Sector. to discuss the place of gas in the future energy mix. The discussions will cover gas market issues in the short and long-term at global. regional and national levels. It also aims to provide a room for dialogue and exchange of views for further cooperation among Member countries. The seminar will establish the position of GECF as a leading institution on Natural Gas matters.

Previous OPEC. Russia have Showdown over US Shale Drilling Ahead of Meeting
Next Chavez Cousin to Lead Citgo. PDVSA`s Arm in US