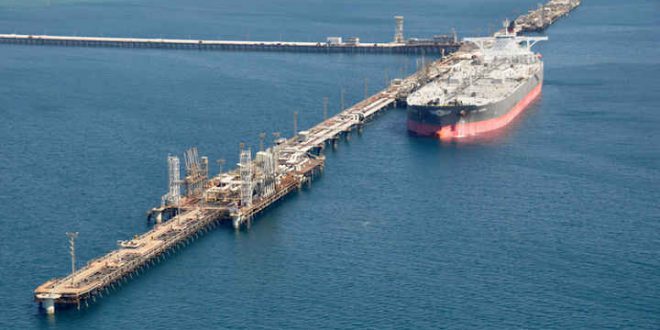 Plans are in place to rehabilitate Kharg Oil Terminal in the Persian Gulf. Iran`s biggest crude oil loading and export facility. managing director of Iranian Oil Terminals Company said.
Kharg terminal. located on a namesake island 35 kilometers off the Persian Gulf coast. has an eastern `T Dock` and a western dock. known as Azarpad. Shana reported.
Pirouz Mousavi added that the western dock is planned for reconditioning in the present fiscal year that ends on March 21.
`We have drawn up plans to maintain and improve Kharg`s crude export infrastructure and Azarpad dock is planned for reconditioning this year.` the official said. without providing details.
Azarpad dock is designed to accommodate very large crude carriers with a capacity of 300.000 deadweight tonnage or more.
`We need to bring up to speed our equipment and docks to accommodate the vessels of Iran`s foreign crude oil customers.` Mousavi added.
Iran`s crude is transported from Bandar Genaveh. a port city in Bushehr Province. for storage and shipment to Kharg depots through three subsea pipelines. Kharg terminal handles more than 90% of Iran`s crude exports.
The No. 3 producer of the Organization of Petroleum Exporting Countries exports more than 2.3 million barrels per day of crude on average. although shipments may vary depending on loading schedule.
Under the sanctions. production was significantly curtailed and exports fell to just above 1 million barrels per day. as some Iranian and foreign tankers were reportedly forced to reflag to continue moving Iranian crude.
Loading Capacity
According to IOTC data. oil loading capacity at Kharg has increased to 8 million bpd. nearly three times over and above the current level of oil and condensates exports.
Close to 780 million barrels of oil were exported from Kharg terminal in the previous fiscal year that ended on March 20. according to data by IOTC.
Over 800 tankers and vessels of all sizes berthed at the terminal in the last fiscal. up from 540 in the previous year. or around 33%.
Once the world’s largest offshore crude oil terminal and the main marine terminal for Iranian oil. Kharg Island’s facilities were decommissioned during the Iraq-imposed war (1980-88) following heavy bombardments by enemy forces.
Kharg terminal`s rehabilitation program comes. as Iran aims to build new oil export facilities on its Persian Gulf coasts to cut short the travel distance for vessels.
The country is building a new oil loading facility in Jask in the southern Hormozgan Province as part of a development plan in the region. which includes the construction of two refineries. a petrochemical complex and oil storage units with a total capacity of 10 million barrels in the first phase and 30 million barrels in the second.