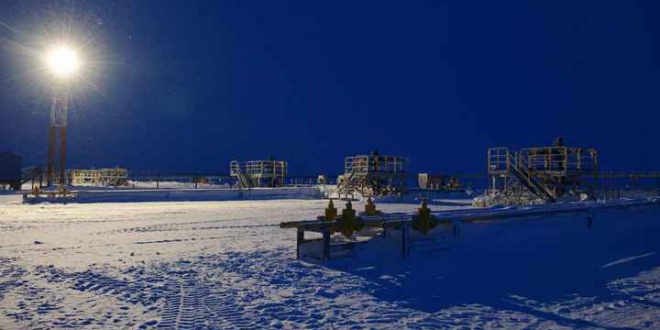 Russia is launching a giant Arctic gas project that is a symbol of its efforts to overcome Western sanctions and strengthen ties with China.
President Vladimir Putin will on Friday oversee the loading of the first tanker with liquefied-natural gas from the $27-billion Yamal LNG facility on an icy Arctic peninsula. The project took years to find financing from China that didn’t violate U.S. sanctions on Russia over Ukraine.
Yamal marks a departure for Russia’s gas exports. which have long focused on state-owned PAO Gazprom delivering fuel via pipeline into Europe. Mr. Putin granted special permission to export gas to Yamal. which will use ice-breaking ships to transport LNG along the northern coast of Siberia during the summer months before heading south for deliveries to Asia.
The project is jointly owned by Russian natural gas firm PAO Novatek. France’s Total SA. China National Petroleum Corp. and a Chinese state investment fund. Novatek. the project’s majority owner. is Russia’s second-largest gas company and is co-owned by a longtime acquaintance of Mr. Putin.
The U.S. barred Novatek from raising U.S. dollar financing for the project in 2014 as part of sanctions on Russia. complicating efforts to source funds and leading the owners to look to China for billions in loans.
Yamal LNG eventually secured the equivalent of $12 billion in loans from two Chinese state banks. part of a flurry of Chinese investments into large Russian energy projects and companies.
The project was aided by large tax breaks and state infrastructure spending. has low production costs and benefits from freezing Arctic temperatures that aid the cooling of the gas to turn it into liquid. Novatek plans a second Arctic LNG plant nearby.