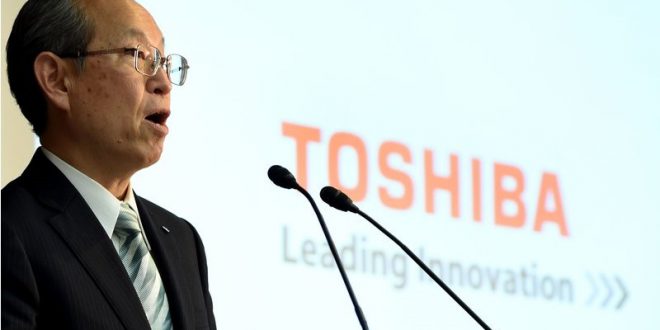 Toshiba Corp. has agreed to sell claims in its Westinghouse U.S. nuclear unit to bolster its capital by 410 billion yen ($3.68 billion) by March. helping it to erase negative shareholder equity and avoid being delisted.

The Tokyo-based company plans to complete the sale of the claims to an entity controlled by the Baupost Group LLC this month. it said in a statement Thursday. The deal will generate after-tax profit of 170 billion yen. Toshiba shares rose as much as 2.9% in Tokyo.

The sale will end the Japanese conglomerate’s troubled foray into overseas nuclear power. which started with the $5.4 billion acquisition of Westinghouse in 2006. Two power projects went billions of dollars over budget and years behind schedule. forcing the U.S. entity to seek bankruptcy protection in March. The resulting multibillion-dollar losses pushed Toshiba’s liabilities beyond its level of assets. threatening its listing on the Tokyo Stock Exchange. Toshiba was forced to put its crown-jewel semiconductor business up for sale to plug the hole in its balance sheet.

The nuclear asset sale and 600 billion yen raised in December through new share issuance together will resolve its capital shortage by the end of its fiscal year. Toshiba said in the statement. Under TSE’s requirements. two straight years of negative shareholders equity are grounds for delisting.

Over the past two months. Toshiba paid its guarantees on nuclear projects in South Carolina and Georgia. entitling it to a total of about $8.1 billion in claims against Westinghouse. The company is selling the claims for $2.16 billion.