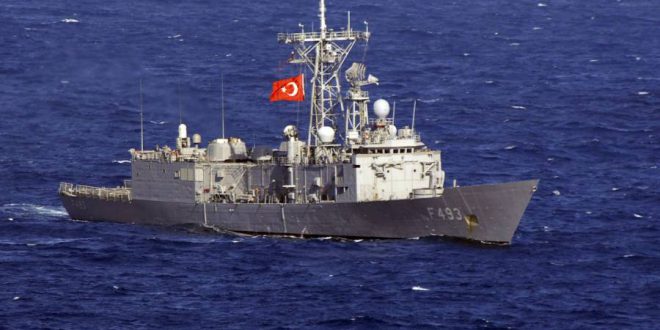 Turkish warships on manoeuvers in the Mediterranean Sea have blocked a rig belonging to the Italian energy firm ENI from reaching an area off Turkish Cyprus to start searching for gas. officials said Feb. 10.

Greek Cypriot Foreign Minister Ioannis Kasoulides told state broadcaster RIK that the rig has halted its journey heading south of the island and was waiting for directions from ENI. He said Greek Cypriot authorities are in contact with the company and the Italian government.

The Saipem 12000 rig was stopped on Feb. 9 by Turkish military ships and told not to continue `because there would be military activities in the destination area.` an ENI spokesman told The Associated Press.

`The vessel has prudently executed the orders and will remain in position pending an development of the situation.`

The ENI official spoke on condition of anonymity in line with company policy.

The rig was on its way to drill an exploratory well at Block 3. an area southeast of the island nation. where ENI is licensed to search for hydrocarbons beneath the seabed.

On Feb. 8. Greek Cyprus said ENI and partner TOTAL of France had discovered a potentially sizeable gas deposit at another block south of the island.

Turkey opposes the drilling. saying it flouts the rights of the breakaway Turkish Cypriots to ethnically-split the conflicted island’s natural resources.