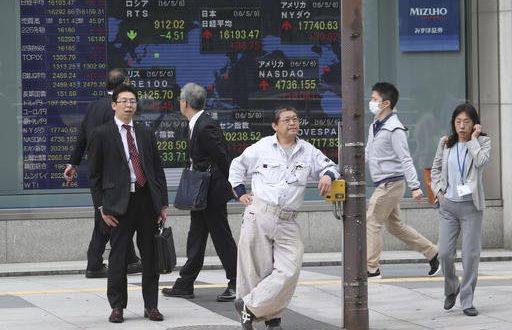 Most Asia markets rose Monday following a blistering lead from Wall Street as a soft jobs report soothed concerns about rising US interest rates. while oil prices extended a rally ahead of Donald Trump`s decision on the Iran nuclear deal.

The figures soothed anxieties that the Federal Reserve could lift borrowing costs four times this year owing to a pick-up in inflation and a strengthening economy. Those worries have acted as a weight on global markets in recent weeks.

But Tokyo ended the morning down 0.5 percent as traders returned following an extended holiday weekend. while Singapore was also lower.

Seoul was close for a public holiday.

However. there are worries that markets may have plateaued. with strong earnings unable to help push gains further.

`The big surprise from this stellar earnings season is that the market hasn`t broken higher.` said Greg McKenna. chief market strategist at AxiTrader.

`Certainly. the earnings have been there but it seems the narrative was molded by the comments of the Caterpillar (chief financial officer) who said Q1 was likely the high water mark. That he said that is not remarkable. That it resonated with the market is the important point.`

Investors remain on edge on concerns about the China-US trade spat after high-level talks in Beijing last week ended with no agreement between the two sides.

`Whatever optimism investors had about China-US trade negotiations should be undermined by the fact there was no communique. with rumours suggesting the two superpowers are sitting worlds apart after the US failed to win any concessions.` said Stephen Innes. head of Asia-Pacific trade at OANDA.

`Even the hint of trade war escalation is terrible news for global equities so there is the threat that any contrary Monday morning headline risks could dampen stock market sentiment right out of the gates.`

Traders are also nervously awaiting Trump`s decision on whether or not to continue with the Iran nuclear deal. which he has in the past derided.

The president has said he will decide by May 12. with many fearing he will pull out of the 2015 deal and spark fresh turmoil in the already tinderbox Middle East.

Speculation he will dump the agreement has fired oil prices to four-year highs. with both main contracts above $70 and forecasts for it to go even higher.

Iranian President Hassan Rouhani warned that if Trump quits the deal then Washington will regret it `like never before`.

The rise in oil has. however. boosted energy firms in Asia with CNOOC. PetroChina and Sinopec surging in Hong Kong. while Sydney-listed Woodside Petroleum and Tokyo-listed Inpex also sharply higher.