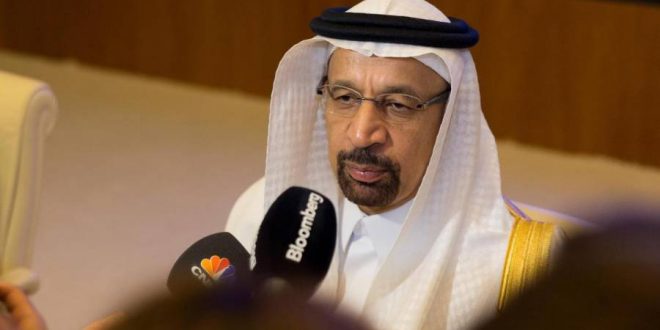 OPEC`s mid-year meeting this month will likely prove bullish for the oil markets. nudged by the return of geopolitical premium and a possible increase in output by swing producer Saudi Arabia that is unlikely to hit the markets until much later. according to analysts.

“OPEC+ OPEC members and Russia] cannot produce the proposed 1.5 million barrels per day (bpd) over the summer. It takes longer to produce such [an] amount and even longer to reach the intended markets.` said Anas Al Hajji. an independent Dallas-based oil analyst. “Therefore. the outcome of OPEC and OPEC+ meeting could be more bullish [for oil prices] than most people expect.` he added.

OPC. led by the world`s top oil exporter Saudi Arabia and non-member nations led by Russia have been curbing production by an average of 1.8 million bpd since the beginning of 2017. to counterbalance a buildup in oil inventories that led to a record lull in oil prices. which plunged from $100 highs to half the levels in 2015. Efforts by the producers who hope to solidify their alliance into a stronger union by year-end have led to a three-year revival in oil prices. which saw Brent surge to an $80 level towards the end of May.

The surge has also been boosted in part by a decline in production in Venezuela. owing to its political turmoil as well as the looming imposition of sanctions over Iran. which is widely expected to take its barrels off the market.

OPEC+ as the Saudi-Russia alliance is called will meet June 22 in Vienna to recalibrate their pact with the aim of keeping inventories low. amid speculation that Riyadh may bring one million bpd onto the market to offset lost Iranian and Venezuelan ouput and to cushion against high prices during the peak driving season.

This high level of compliance may be up for an ease-off this summer.

“The most plausible scenario is maintaining the OPEC+ production cut agreement but with lower compliance to compensate for the production losses from Venezuela and the anticipated losses from Iran. However. it remains [to be seen] how they will work out “lower compliance.“ There are various ways of achieving this goal.` said Mr Al Hajji.

This may prove challenging as longtime OPEC dissenter Iraq. the group`s second-largest producer has voiced concern about any `unilateral actions` that may reverse recent gains achieved by the producers.

The Iraqi oil ministry. which has seen its exports thrive under a higher oil price environment issued a statement urging producers to “not over-exaggerate the need of the oil market for more oil supplies for the time being. which could cause big harm to the global markets.`

`This could be misinterpreted by speculators and consumers. leading to a significant fall in oil prices and this is unacceptable to us.` the statement read.

The possibility of low oil prices should supplies flood the market is of great concern for Iraq. which has big plans to boost upstream capacity. with the country`s rig count one of the largest contributors to total rigs deployed in the region. Iraq. which has revised its production capacity to 6.5 million bpd by 2022 added 58 rigs in the first quarter of the year. 17 more than the same time last year. according to Riyadh-based Apicorp.

A `limited agreement and short-term increase` to boost prices subject to review in November will likely be on the agenda in Vienna. said Robin Mills. chief executive at UAE-based consultancy Qamar Energy.

`Otherwise Saudi Arabia and Russia will have to go it alone. which would be bearish for prices.` he added.

Iran. and Venezuela are likely to oppose the move. while Iraq. despite its reservations may actually be able to use such a boost in output to legitimise any possible over production.

Other analysts remain optimistic that oil prices will likely remain more bullish supported by rising consumption during the summer months in oil producing countries in the Middle East. due to higher power requirements for cooling as well as in the US. during the driving season.

The US shale industry despite its market resilience cannot all by itself help plug the market. and together with the anticipated Saudi action to boost output will lead to to an expected decline in OPEC spare capacity. noted Mustafa Ansari. senior economist at Apicorp.

`Especially if production cuts are eased. then the market will have a small buffer within which it can cushion itself against supply disruptions. leading to price hikes and higher volatility.` he added.