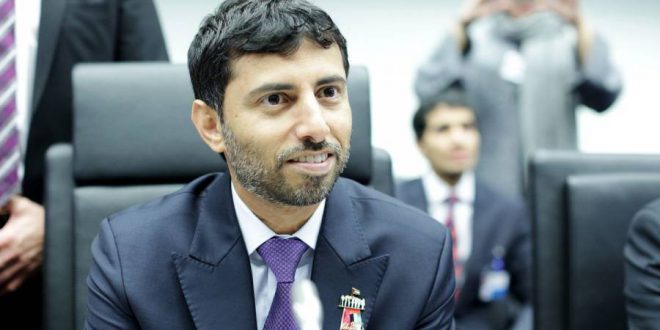 The Organization of Petroleum Exporting Countries (OPEC) remains optimistic in fulfilling its goal of delivering sustainable oil market stability. thanks to its co-operation with its key partners. said the UAE Minister of Energy and Industry.

Suhail bin Mohammed Faraj Faris Al Mazrouei. also President of the Organization of Petroleum Exporting Countries (OPEC) Conference for 2018. was speaking ahead of 174th meeting which kicks off on June 22 in Vienna. Austria.

Expressing his optimism over regaining balance to the international oil market. Al Mazrouei said: `Looking ahead. I remain optimistic that we will fulfil our goal of delivering sustainable oil market stability. which is intended to serve the long term interests of producers. consumers and the global economy.`

`Central to this optimism is the unprecedented level of co-operation and conformity from OPEC and its partners to the production adjustments that were promised under the ‘declaration of cooperation’.` he added.

The UAE minister said stock levels had dropped significantly since the beginning of 2017 and the market was moving ever-closer to becoming rebalanced.

`This will undoubtedly be a key topic of discussion in our June meeting.` he added.

As President of the OPEC Conference for 2018. Al Mazrouei is to preside over both events.

`In this meeting and the 7th OPEC International Seminar. a unique assembly of Ministers. heads of intergovernmental organizations. chief executives of national and international oil companies. industry leaders. academics. energy experts and media. we will review the noteworthy progress that we are making.` he stated.

He also commended the performance and new approach of the OPEC over the first half of 2018.

“It has been a constructive first half of the year.“ said Al Mazrouei. `OPEC has engaged in open and transparent dialogue with a broad range of stakeholders. an approach that I wholeheartedly support and I believe is beneficial to all parties.` he stated.

`We are fast approaching the mid-way point of an important year for OPEC and its partners and it has been a constructive first half of the year.` he noted.

`Working closely with the OPEC Secretary General and his team. I was pleased to participate in numerous seminars. events and meetings to further strengthen the organization’s engagement and rapport with organizations such as the IEA and IEF. and other industry stakeholders.` he added

Previous Saudi Arabia Holds all the Cards despite Iran Threatening to Block oil output
Next Russia will Develop Two Joint Fields between Iran.Iraq