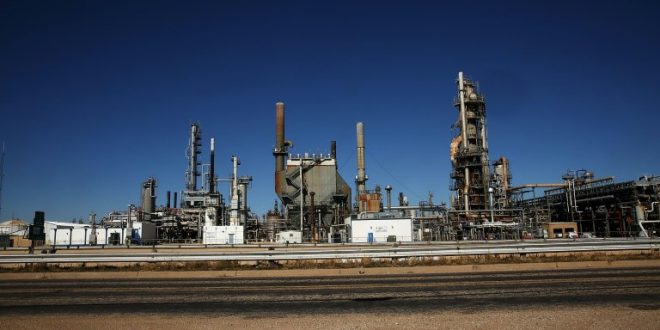 The US plans to release 11 million barrels of oil from its 660-million-barrel emergency stockpile. just as American sanctions on Iranian oil exports kick in.

The sour. high-sulfur crude will hit the market in October and November. according to a notice of sale from the Energy Department.

That timing may reflect the White House’s concern over a tight oil market amid the renewal of US sanctions on Iran. according to analysts at ClearView Energy Partners. The Trump administration has asked allies to halt all imports of Iranian oil by November 4. stoking global supply fears.

Analysts have also speculated about whether President Donald Trump will announce an emergency release from the crude stockpile to lower US pump prices in the run-up to November’s mid-term elections.

Yet an 11-million-barrel sale over two months likely won’t do much to offset the impact of sanctions. which the administration estimates will remove 700.000 to 1 million barrels a day of Iranian crude from the global market by early November.

The October sale is part of a regular draw-down schedule to raise money for government programs. The Energy Department will draw crude from three sites that are part of the Strategic Petroleum Reserve: Bryan Mound and Big Hill in Texas. and West Hackberry in Louisiana.

Any further action by the president. who can release up to 30 million barrels in an emergency. is unlikely before the November 4 deadline. ClearView said.

Bids must be submitted no later than 2pm Central Time on August 28. with contracts awarded within seven business days. Deliveries will take place in October and November. according to the notice.

On Tuesday. oil extended gains above $66 a barrel as US crude stockpiles are seen declining.

Futures in New York climbed as much as 0.4 per cent after a 0.8 per cent gain on Monday. Nationwide inventories in the US probably fell 2 million barrels last week. according to a Bloomberg survey of analysts before the Energy Information Administration’s data due Wednesday. Workers started a strike at North Sea oil and gasfields on Monday.

Oil has declined for seven straight weeks as uncertainty over a US-China trade standoff and risks of economic turmoil in Turkey spilling over into other emerging markets weighed on prices. Investors are also closely watching supplies from the US and Opec amid the renewal of American sanctions on Iran.

West Texas Intermediate crude for September delivery. which expires on Tuesday. rose as much as 25 cents to $66.68 a barrel on the New York Mercantile Exchange and traded at $66.60 at 9:01am in Tokyo. The contract climbed 52 cents to $66.43 on Monday. The more-active October contract lost 1 cent to $65.41. Total volume traded Tuesday was about 81 per cent below the 100-day average.

Brent for October traded at $72.16 a barrel on the London-based ICE Futures Europe exchange. down 5 cents. Price on Monday advanced 38 cents to close at $72.21. The global benchmark traded at a $6.73 premium to WTI for the same month.