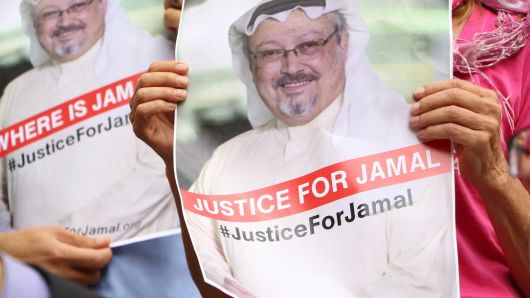 As Saudi Arabia pushes back against international pressure that it played a role in the disappearance of a prominent journalist. analysts are warning there could be fallout for global oil markets.

Relations between the kingdom and the some parts of the international community have deteriorated rapidly after Jamal Khashoggi. a journalist who resided in the U.S.. disappeared early this month after visiting the Saudi consulate in Istanbul.

Turkey reportedly believes the Washington Post journalist and critic of the Saudi administration was deliberately killed inside the building and his body removed. Riyadh has dismissed the claims.

The stock market in Saudi Arabia plunged on Sunday. and analysts believe oil could be the next to be affected.

`Any Saudi retaliation will presumably mainly come through reduced oil supply and higher prices. That won`t help market sentiment.` he wrote in a note on Monday.

U.S. President Donald Trump said on Saturday there would be `severe punishment` for Saudi Arabia if it turned out that Khashoggi was killed in the consulate. But the Middle Eastern country said on Sunday it would retaliate to possible economic sanctions taken by other states over the case. the state news agency SPA reported. quoting an official source.

Michael Heise. chief economist at Allianz. told CNBC`s `Squawk Box` on Monday. that oil could indeed by used as a tool of retaliation by Riyadh.

`They might contemplate doing that. depending on how tough the sanctions. for example by the U.S.. might be. That might lead them to. in the end. use oil as a weapon.` he said. `I`m not too optimistic on that issue.`

`If the oil price continues to react in an upward direction … that affects many markets. also many emerging markets in Asia. which are net importers of oil. I think that is the most important transmission channel of this crisis.` he added.

The incident is adding to already existing upward pressures on oil prices: Supply is set to fall after U.S. sanctions on Iran kick in next month. The Trump administration had been relying on Saudi Arabia — one of the world`s largest oil producers — to maintain supply and curb surging prices.

That could pose a conundrum for Trump if the situation deteriorates further as U.S. midterm elections loom.

`There`s this situation at the moment where President Trump is heading into the midterm elections. he doesn`t want a high oil price because that is reflecting through to a high gasoline price.` Matthew Smith. director of commodity research at tanker tracking firm ClipperData. told CNBC`s `The Rundown.` `At the same time. we`ve got these sanctions that are going to be kicking in on Iran.`