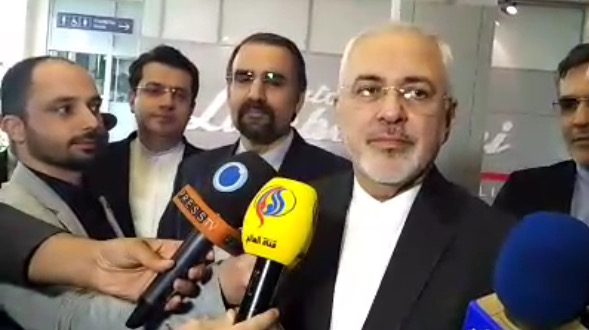 Iranian Foreign Minister reiterated that Trump. president of a country with the highest military budget in the world. sends representatives to various countries forcing them into stopping business with Iran. which indicates the decline of US influence and power.

Zarif made the remarks at the 4th National Congress of Nedaye Iranian Party — NEDA. held at Milad Tower on Friday morning.

Zarif stressed that Iran is a powerful and influential country. in terms of geography and history. and this is a fact that has been proven not only over the past forty years after the victory of Islamic Revolution. but also since the past 7000 years ago.

`Iran`s defense budget in the whole region is the lowest. with the exception of Egypt. Saudi Arabia spent over $69 billion last year on weapons purchases. The total budget of the Islamic Republic of Iran in defense field is less than $ 16 billion. So what has made us so powerful? Our nation are the backbone of our national security and we are nothing without our people.` he added

He referred to the remarks made by US Sen. Lindsey Graham in a recent interview with Fox News that without US pressure against Iran. `they`d be speaking Farsi in about a week in Saudi Arabia`. and said `I am ashamed of hearing these remarks. as a Muslim and a person living in this region. but I am also proud we have lived in such a way for over 40 years that no one could dare to say the same thing about us.`

Why are our people so important? If it was fifty years ago. could we talk like this about the role of our nation? No. because the components and tools of power have changed. and that we could act without the intervention of the foreigners and aliens represents our strength. our power is endogenous. Iranian foreign minister noted.

The era of all-powerfulness is over. and this is in our favor. Mr. Trump once said that the US military spending equals that of entire world. the United States now has allocated $650 billion for its defense sector. however. President Trump. with all this power. sends representatives to various countries forcing them to stop doing business with Iran.