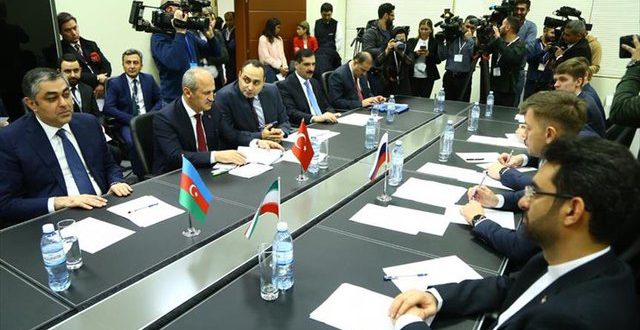 Azerbaijan. Turkey. Russia and Iran agree to set up joint IT venture

Azerbaijan. Turkey. Russia and Iran will establish a joint venture on information technologies.

The decision was adopted at the Azerbaijan-Turkey-Russia-Iran four way ministerial meeting in Baku.

Four countries have decided to form a joint venture to facilitate closer working opportunities of public and private sector institutions operating in the field of information technologies and to open up opportunities for them.

During the meeting. the ministers discussed new companies. satellite services and fiber-optic networks.

The agreement was reached as the countries` IT ministers held a meeting here as part of Bakutel 2018. the 24th Azerbaijan International Telecommunications. Innovations and High Technologies Exhibition and Conference.

`This is the first four-party meeting of the IT ministers of Azerbaijan. Turkey. Russia and Iran. Azerbaijan proposed to set up a working group in order to develop relations between IT authorities of the four countries.` he said.

The second four-party meeting will be held in Iran.