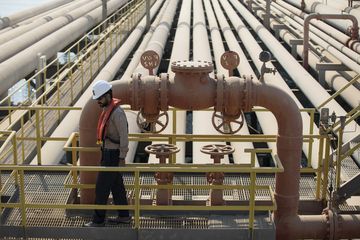 Iranian oil isn’t cheap but there is a big difference with the price of Saudi and U.A.E crude. Turkish Foreign Minister Mevlut Cavusoglu said at a reception in Ankara. according to state-run TRT television. The U.S. is taking a decision and wants all countries to comply with it. Why should we pay the price?

The Trump administration is ending waivers that allowed a handful of countries including Turkey to continue importing oil from sanctioned Iran a year after the U.S. withdrew from the 2015 nuclear deal. Secretary of State Mike Pompeo has said he’s confident the market will remain stable as Saudi Arabia and the U.A.E. will ensure an appropriate supply of oil along with the U.S.

Turkey is resisting the idea of buying oil from America’s two anti-Iran allies. whose relations with Ankara are fraught after the murder of Saudi critic Jamal Khashoggi in the kingdom’s consulate in Istanbul last October. Turkey has also long opposed the U.S. curbs on Iran. with President Recep Tayyip Erdogan saying last year that such sanctions are aimed at tipping the balance in the world and violate international law and diplomacy.

Iran and Turkey plan to set up a financial mechanism to circumvent U.S. sanctions on the Islamic Republic. Iranian Foreign Minister Mohammad Javad Zarif said after visiting Ankara last week. Turkey has long defended the trade with its eastern neighbor as a strategic necessity but taking on the U.S. can be risky as Ankara struggles to secure the release of a senior banking executive convicted in New York of helping Iran evade U.S. financial sanctions.

The blowback from American sanctions against Iran could also hit Turkey’s economy. which entered its first recession in a decade last year as oil prices surged. The prospect of higher prices or the risk of a confrontation with the U.S. don’t bode well for Turkey’s currency. already battered by weeks of upheaval.

Turkey could very soon find itself in a difficult position at the time when inflation remains stubbornly high close to 20 percent. said Piotr Matys. a London-based analyst at Rabobank. Iranian oil could be the source of another diplomatic spat between Ankara and Washington. when the relationship is already tense due to Turkey’s insistence on buying a Russian missile-defense system.

China. India and Turkey aren’t necessarilycommitted to bringing imports of Iranian crude down to zero and the U.S. will have to negotiate over the terms of their withdrawal from Iran or be prepared to deal with their noncompliance. according to a report by Richard Nephew published by Columbia University’s Center on Global Energy Policy.

Turkish refiner Tupras Turkiye Petrol Rafinerileri AS was the worst performing stock by index points on Wednesday. declining 2.4 percent as of 4:36 p.m. in Istanbul. Tupras declined to comment on how it would offset any potential cut in Iranian supplies.