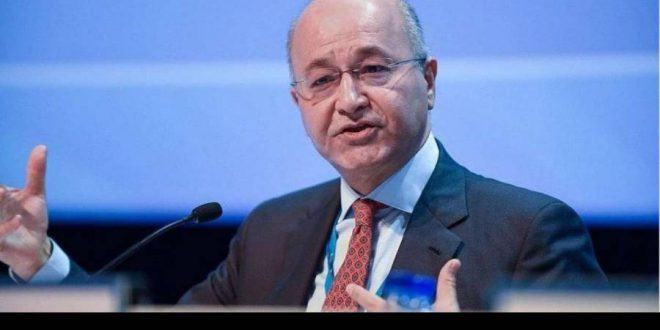 During the meeting in Baghdad on Saturday. the two high-ranking officials discussed regional developments and bilateral ties.

According to a statement by the Iraqi president`s office. Salih and Zarif also underlined the necessity for preventing increased tensions in the region and importance of joint efforts to protect the region from the damages resulting from the US sanctions.

The statement also added that Salih stressed the importance of strengthening relations and cooperation with Iran.

During the meeting. Zarif submitted an invitation from President Hassan Rouhani to Salih which was welcomed by the Iraqi president.

In relevant remarks earlier this month. President Rouhani told Salih that Tehran was serious in its call for all-out expansion of relations with Iraq. highlighting that deepening bilateral relations is favored by the nations of both countries.

During the phone conversation. Rouhani said. “We are seriously seeking to develop our friendly relations with Iraq.“

He added that executing Tehran-Baghdad agreements was a valuable step in development of relations between the two countries. stressing that attempting to further deepen these ties was what both Iranian and Iraqi nations wanted.

Congratulating the advent of the holy month of Ramadan to the Iraqi President. government and nation. he said. `The two countries have similar points of view regarding critical regional and international issues. and I hope we can further deepen ties through more cooperation.`

On the United States` destabilizing actions in the region. including making problems for Iran`s oil exports. Rouhani said. `All regional countries need to understand the current critical conditions and cooperate with each other to stop US` bullying aimed at creating instability in the region.`

`These destabilizing actions of the US in the region will undoubtedly be detrimental to the peoples of the region. and even the American people` said the Iranian president.

For his part in the phone call. the President of Iraq also congratulated the arrival of the Islamic month of Ramadan and said. `Relations between Iran and Iraq are based on strong historical and cultural pillars and the common interests of the two nations and we are determined to develop these relations.`

He said. `We are attempting to improve bilateral relations based on the good agreements made between the two countries to serve our nations.`