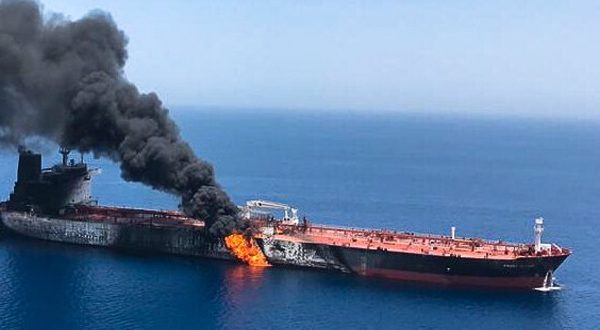 Hezam al-Hezam made the remarks after two Japan-related oil tankers were attacked in the Sea of Oman on Thursday Japan`s prime minister was meeting top Iranian officials.

Writing on his twitter page. al-Hezam described the attacks as the UAE`s plot against Iran.

`The UAE is playing with regional security after targeting the oil tankers in the Sea of Oman and therefore. it had declared a state of emergency before the incident. The reason is to make the US agree with military attack against Iran and win Oman and Pakistan`s support.` he added.

Hezam said that Iran is not naïve to threaten shipping in the region through such an option. irrespective of the economic sanctions imposed on the nation.

He also referred to the incidents which happened for oil tankers in Fujaireh last month. and blamed Mohammed Dahlan. a senior advisor to UAE Crown Prince Mohammed bin Zayed. for them.

`I had told you in Ramadan that Abu Dhabi has inflamed war in the (Persian) Gulf with Riyadh`s support. They think that (war) is a kids` game. Iran can annihilate the UAE only with a single retweet.` Hezam said.

All crew members of the two oil tankers which were hit in the Sea of Oman were saved by Iranian rescue teams on Thursday.

Iranian rescue vessels have picked up the 23 crew members of one of the tankers and 21 of the other from the sea and brought them to safety at Iran’s Jask. in the Southern Hormozgan Province. an informed source said on Thursday.

Earlier. media reports said explosions had occurred on the two oil tankers. apparently as a result of attacks.

Details about the incidents are still sketchy. but the ships are known to have sent distress signals to nearby ports and vessels.

While the US Navy claimed it had been assisting the tankers. the Iranian rescue vessel was first to reach them and rescue the crew. who had plunged into and were floating on the sea to avoid the fire.

The MT Front Altair had been loaded at a port in the Gulf of Oman with a petroleum product known as naptha. and was on its way to the Far East. Its crew of 23 is safe after being evacuated by the nearby Hyundai Dubai vessel.

Meanwhile. BSM Ship Management says its crew of 21 aboard the Kokuka Courageous carrying methanol has also been rescued in the Gulf of Oman by a nearby Iranian vessel after what it described as an “incident on board which resulted in damage to the ship’s hull starboard side“.

The Arabic-language al-Mayadeen reported that Front Altair oil tankers was fully drowned in the Sea of Oman after the incident.

Japan`s Trade Ministry said that the two oil tankers were reportedly attacked near the Strait of Hormuz which is located between the Persian Gulf and the Gulf of Oman carried `Japan-related cargo`.

Meantime. an informed source in the Iranian Armed Forces said that Iranian Army sent several vessels and helicopters along with rescue teams to the damaged oil tankers upon their request for help.

Previous Oil Demand Signals are Flashing Red as Price Dives Toward $50
Next Oil Supply to Swamp Demand. Squeeze OPEC in 2020