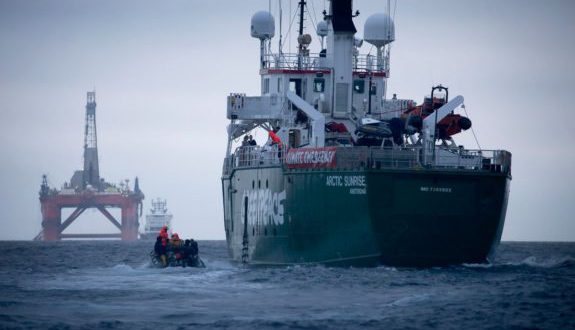 The campaign group said its Arctic Sunrise vessel overtook Transocean’s Paul B Loyd Jr rig as it sailed towards the Vorlich field. where it was to drill a well for BP.

The energy company accused Greenpeace of recklessness and said the organisation was “wilfully breaking the law“.

BP took out an injunction in an effort to stop the Arctic Sunrise from interfering with the rig’s journey.

Greenpeace claimed Paul B Loyd Jr was 20 miles from the drilling site when it was forced to make a U-turn.

Vessel tracking website Marine Traffic indicated that the rig was sailing in the general direction of the north-east coast of Scotland as of 9pm last night.

This morning. Paul B Loyd Jr was heading south-east again.

The installation was prevented from leaving the Cromarty Firth between Sunday and Friday last week by a succession of activists clambering on board.

It eventually departed after two demonstrators were arrested on Friday afternoon. A total of 14 arrests have been made over the course of the protest.

It’s understood activists tried to board the rig again this morning during transit.

A spokesman for BP said: “Reckless attempts by Greenpeace protestors to interfere with the rig while under transport risk the safety not only of those individuals but anyone responding.

“There is also a clear and blatant breach of criminal law and the court orders in place against both Greenpeace and their vessel. Greenpeace is choosing to wilfully break the law.“

Greenpeace UK executive director John Sauven said: “BP’s oil rig has done a U-turn and we urge chief executive Bob Dudley to do the same. BP must stop drilling for new oil and switch to renewables.

“BP will face opposition wherever they plan to drill for more oil. from the North Sea to the Arctic and from the mouth of the Amazon to the Gulf of Mexico.

“We have tried letters. meetings. petitions – none of that worked. Now we’re going to stand in BP’s way to prevent further harm to people at the sharp end of the climate crisis.

“In the long run. this is a confrontation BP can’t win. They are in it for their profits. we’re in it for our planet’s future.

“BP must start ditching the climate-wrecking side of its business and switch to renewables.“

A spokesman for Police Scotland said: “We were made aware of further activity by Greenpeace in the North Sea during the early hours of Sunday June 16 and are liaising with BP. Transocean and the Maritime and Coastguard Agency.“