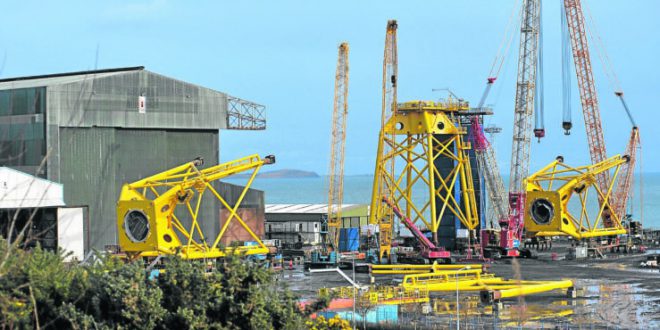 Glimmer of Hope for BiFab as High-Level Talks Announced

As campaigners pledged to storm the bastion of the French firm’s Scottish headquarters in the hope of securing work for the region. it was revealed a slice of a major contract could be on the horizon.

BiFab missed out on the £2 billion project to create jackets for 60 turbines for the Neart na Goaith (NnG) wind farm off the Fife coast. which could have created up to 1.000 jobs.

While it will be awarded to a company in Indonesia. it has emerged there are hopes some work could still benefit the company’s yards in Methil and Burntisland.

We hope we can will get round the table and hammer out some sort of agreement that will bring work we desperately need in Fife. he said.

Mr Smith was speaking at a packed public meeting in Buckhaven aimed at sending a clear message that Fife is ready for renewals.

Mr Smith said the campaign was not just about signing one contract but about the long-term future of Scotland’s renewable energy industry.

He added. however. that securing the NnG contract was critical if the industry was to survive.

If we don’t get this now. we will not have a renewables industry in Scotland. he said.

This campaign is actually working. he said.

“The unions are fully behind this and we intend to see it through to victory.

We have an alliance of people who are all part of the future. We’re their worst nightmare.

Tam Kirby. of Fife Trades Council. told the meeting it was crucial the campaign was a success and said it was just the start of things to come.

I’m all for storming the bastions of EDF’s headquarters in Edinburgh. he said.

The community has been urged to join the demonstration on July 5 and can keep an eye on the Fife – Ready for Renewals Facebook page for details.

A spokesperson for EDF. which was not represented at the meeting. said it was hoped a long-term plan for BiFab could be developed.

We understand that the NnG project is seen as critical to securing more work for the yard and we are working hard to make that a reality. they said.

The issue is far bigger than our project alone and we firmly hope a range of bodies. including us. industry groups. the trade unions and the Scottish and UK governments can come together to develop a long-term plan for BiFab to ensure success.