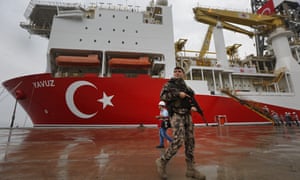 Greece Offers Opportunity for Turkey If Drilling Disputes are Resolved

Nikolaos Dendias said in an interview in Washington that there are a wide range of issues where Greece could cooperate with Turkey. Those opportunities are currently held up by a disagreement over Turkey’s drilling operations in the waters off Cyprus.

We have to help our societies create growth. create prosperity. create stability in the region and also really at the end of the day become friends again. Dendias said. `There are thousands of synergies from tourism to exploitation of natural resources. You name it. it’s there.

Turkey’s already strained relationship with the EU has frayed further since President Recep Tayyip Erdogan’s government vowed to go ahead with energy exploration in the eastern Mediterranean in a growing dispute with EU member Cyprus. EU foreign ministers — including Dendias — agreed on Monday to freeze most high-level contacts with Turkey and to cut the flow of funds to the country. while holding back for now on sanctions that could target Turkish companies involved in offshore drilling in the region.

For us. it is not a question of the amount of penalties. the 59-year-old lawyer and former defense minister said in the interview at his nation’s embassy on Wednesday. It is to make Turkey understand that that is not the way forward either for us or for them or for Cyprus or for the stability in the region.