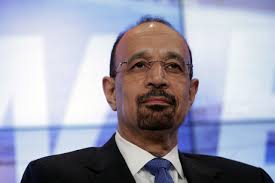 In a meeting in New Delhi. the two ministers discussed the threats facing international navigation in the Strait of Hormuz. securing oil supplies. and collaborative work to restrain these offenses. Al-Falih said on his Twitter account.

They also talked about the current oil market situation. OPEC+ decision to extend the oil output cut. attracting investments to the energy sector which would benefit both the producers and consumers. and the Kingdom’s leading role in maintaining market balance.