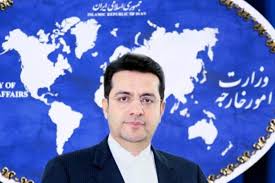 The Iranian foreign ministry described the British-proposed naval coalition in Persian Gulf as an illusion. stressing that deployment of foreign forces will further increase tensions in the region.

`We consider the presence of foreign forces as the source of all insecurities. instabilities and tensions in the region. The regional states are well skilled in defending their security and the trans-regional states` presence is not needed. We consider such proposals in line with increasing tensions and they do not extend any help to regional security. Iran and the regional states will establish security in the region well.` Foreign Ministry Spokesman Seyed Abbas Moussavi told reporters in a press conference in Tehran on Monday.

`We do not recommend the trans-regional states to join such coalitions which do not have a correct basis and are based on ambiguities and illusions.` he added.

Moussavi underlined that Iran views establishment of security in the Persian Gulf and the Strait of Hormuz as its responsibility. and said. `We do not want others to bother themselves and come to the region for the establishment of regional security.`

In relevant remarks on Sunday. Iranian President Hassan Rouhani blamed the military buildup of the trans-regional states as the main contributor to instability and insecurity in the region.

`Presence of foreign forces renders no help to regional security. but is the root cause of tension.` President Rouhani said in a meeting with Omani Foreign Minister Yusuf bin Alawi in Tehran.

The president affirmed that the Islamic Republic of Iran has always tried to help ensure safety of free shipping in the Gulf of Oman. the Persian Gulf. and the Strait of Hormuz.

He emphasized that Iran and Oman have always cooperated to resolve regional issues. and took positive steps hand in hand.