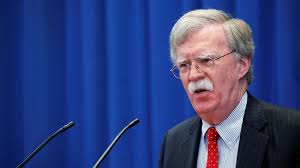 Washington will hold off on introducing more secondary sanctions against Iran. which would have affected Russian. Chinese and European entities helping Tehran with the upkeep of its nuclear sites.

In a pre-recorded interview with Fox Business channel on Wednesday. US President Donald Trump’s National Security Advisor John Bolton announced that the US would not slap sanctions on companies engaged in research and maintenance at certain Iranian nuclear sites – for now.

Bolton said the US would be “watching those nuclear activities very. very closely.“ describing the waivers as a “short 90-day extension“ as opposed to a 180-day one.

The US previously granted 180-day extensions of waivers to countries involved with the Iranian civilian nuclear program until early May. when tensions between Tehran and Washington soared amid a US military build-up in the Middle East and attacks on oil tankers in the Gulf of Oman. for which the US blamed Iran.

The flare-up was on the verge of spiraling into a head-on military confrontation. when Iran shot down a US military drone that it claimed entered its airspace over the Strait of Hormuz in late June. US President Donald Trump claimed that US armed forces were “cocked and loaded“ and ready to rain down missiles on Iran when he decided to pull the plug on the military adventure.

In addition to slashing the duration of the waivers by half. the US State Department in May discontinued two waivers that allowed Iran to exchange its enriched uranium for natural uranium and send excess heavy water for storage.

Five waivers were still extended and are set to stay in place at least for another 90 days. These concern the Islamic Republic’s Fordow enrichment facility. the Arak nuclear complex. the Bushehr nuclear plant. and the Tehran Research Reactor.

Bolton’s announcement confirmed an earlier report by the Washington Post. which cited six anonymous US officials on Tuesday as saying that Treasury Secretary Steven Mnuchin had talked Trump out of enforcing sanctions championed by both Bolton and US Secretary of State Mike Pompeo. Mnuchin reportedly argued that more time was needed to look into the potential fallout from the sanctions. which may drive the wedge deeper between the White House and European nations that still abide by the 2015 Iran nuclear deal.