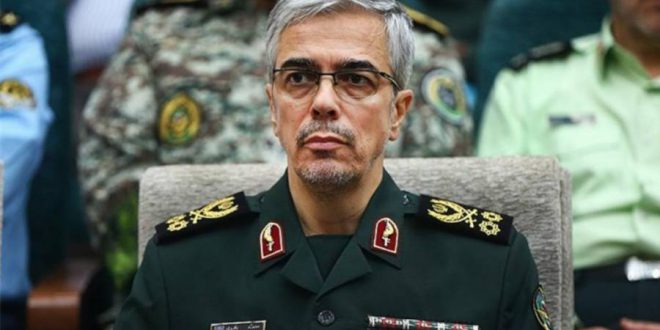 Iran not to be Fooled by US Call for Talks

Chief of Staff of the Iranian Armed Forces Major General Mohammad Hossein Bagheri has said that the Iranian nation will never be fooled by the enemy’s call for negotiation.

Chief of Staff of the Iranian Armed Forces Major General Mohammad Hossein Bagheri made the comments during a ceremony attended by families of martyrs held in the headquarters of the armed forces in Tehran on Monday.

Bagheri said that despite all the conspiracies. the eight years of imposed Iraqi war. and the all the acts of sabotage and insecurity in the country by the enemies. the country is at the peak of power and is following its path towards realizing its goals in the regional and international arenas with more power and determination today.

The chief Iranian military official added that the enemies created the Takfiri terrorist groups to contain and damage Iran’s power. while all of them have been defeated in Iraq. Syria and Yemen at the hands of Resistance forces.

Elsewhere. Bagheri said that the Islamic Republic of Iran under the wise leadership of the Ayatollah Khamenei as the chief commander of all armed forces will continue its path towards creating a new Islamic civilization regardless of the enemies’ call for negotiation.

He further noted the Iranian nation will never be fooled by the enemy’s call for negotiation and will not be part of the good cup bad cup game.