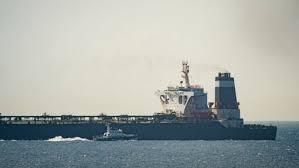 Russian President Vladimir Putin recommended Iran`s neighbors in Persian Gulf to treat Tehran with respect. as tensions between Iran and its Arab states neighbors. specially Saudi Arabia. have risen in recent months. and condemned the Friday attack on an Iranian oil tanker in the Red Sea.

The Russian leader urged Iran`s neighbors to “respect“ the interests of Tehran as a country that has “existed on its territory for thousands of years“.

During a joint interview with RT Arabic. UAE-based Sky News Arabia. and Saudi Arabia’s Al-Arabiyah broadcasters. Putin decried attacks on oil tankers in the Persian Gulf. no matter who was behind them.

Putin`s remarks comes after tanker SABITI belonging to Iran’s government-owned oil corporation was hit by two explosions and caught fire in the Red Sea. near Jeddah on Friday. The incident is being treated as a terrorist attack.

The explosions came a few months after Iranian oil tanker Happiness-1 faced “engine failure“ and lost its control with 26 on board off the Red Sea port of Jeddah. and was later transferred to the port city for maintenance.

The Friday`s incident comes less than a month after several drones targeted Aramco’s major oilfield in Saudi Arabia. inflicting heavy damage to the facility and cutting production in half.

Washington and Riyadh insist. without providing any reliable evidence. the Yemeni Houthi Ansarullah movement was incapable of launching such an elaborate assault. and accused Iran of being the perpetrator. France. Germany. and the UK have recently joined the US and Saudi Arabia in pinning the blame for the Yemeni raids on Tehran. Iran. however. has rejected the accusations of involvement in the attack on Aramco. saying the US and Saudi Arabia`s allegations that Tehran was behind the Yemeni drone attacks are out of desperation.

Also in early May. a total of four tankers were damaged in an incident near the UAE port of Fujairah. with two of them belonging to Saudi Arabia and the remaining two reportedly sailing under a Norwegian flag and UAE flag. In Mid-June. two oil tankers near the strategic Strait of Hormuz were reportedly attacked. The Marshal Islands-flagged Front Altair and the Panama-flagged Japanese-owned Kokuka Courageous were hit in suspected assaults in the Gulf of Oman.

The US military blamed the Iranian government for damage sustained by the commercial ships. but gave no proof of its claims while the nature of the incident remains unknown. Tehran strongly rejects any involvement in these sabotage acts.

The Islamic Republic had warned of plots by a number of radical officials in the US administration to launch false-flag operations in the region. calling on the regional states to take care of any adventurism by foreigners.

Several analysts believe that the “sabotage operations“ against the tankers were a covert operation launched by Mossad and the CIA aiming to deceive the world that Iran was responsible for the attacks.