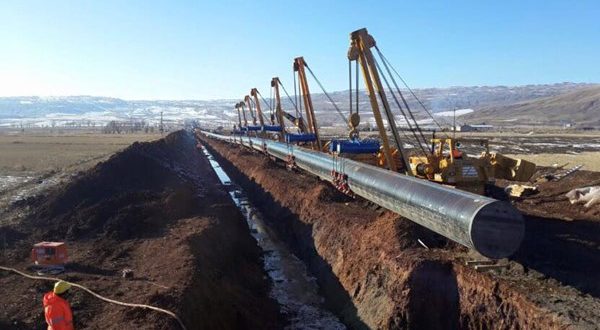 Russia and Germany discussed in Moscow on 9 October issues related to supplies of Russian natural gas to Europe in the period from 1 January 2020. during a meeting of Gazprom CEO Alexey Miller and Georg Graf Waldersee. Commissioner of Germany for Gas Transit across Ukraine. Gazprom said in a press release.

According to Gazprom. Ukraine is currently taking steps to integrate the EU’s Third Energy Package into its legislation. “To that end. the Ukrainian authorities need to. inter alia. ensure the independence of the national energy regulator and create an independent certified gas transmission operator.“ Gazprom said in a press release. adding that it was noted that the operator will have to undertake extensive preparations and substantial time commitments to successfully pass the certification and licensing procedure. In addition. there remains a need to approve an economically sound and transparent gas transmission tariff methodology for the independent operator. Gazprom said.

“Unless these comprehensive efforts are completed by January 1. 2020. the only option for cooperation in the transitional period will be to extend the effective contract for gas transit adapted to the current market conditions.“ Gazprom said.

Miller also stressed that Ukraine should first and foremost make a decision on the future amounts of Russian gas to be procured under the direct contract. Gazprom said. adding that this will determine the throughput of the gas transmission system that Gazprom will be ready to support in Russian territory in order to supply gas toward Ukraine.

Meanwhile. Ukraine’s Naftogaz CEO Andriy Kobolyev said at the 5th Ukrainian Gas Forum in Kyiv on 10 October that Ukraine must deliver a fully certified and legally compliant transmission system operator (TSO) by the end of the year.

According to Kobolyev. failure to fulfil this condition would cause a number of problems with shippers and European partners to whom Ukraine made commitments. “If we fail to duly complete the TSO unbundling process. Ukraine will be blamed for any problems that may occur during the coming winter. We don’t have four months. We must deliver a fully certified TSO by the end of the year.“ the Naftogaz CEO explained.

According to Naftogaz. Kobolyev is confident that Ukraine can have an independent and fully capable TSO by the end of the year if all stakeholders cooperate and ensure that all necessary decisions are made fast.

Proper and timely implementation of European gas market rules is one of the key prerequisites for successful unbundling. Kobolyev said.

Commenting on current TSO unbundling status. Kobolyev reported that Naftogaz had transferred the necessary staff. business processes and IT systems required for the flawless operation of the new TSO to the Gas Transmission System Operator of Ukraine LLC (GTSOU). In order to hand over the key asset. which is the gas transmission system. to the new operator. Ukraine’s parliament and government need to make relevant decisions.

GTSOU will be sold to Mahistralni Gazoprovody Ukrainy JSC (MGU). which is owned by the Ministry of Finance. As a result of the unbundling process. GTSOU will operate the Ukrainian GTS and act as a party to gas transmission contracts with all users starting from 1 January 2020. Naftogaz said. adding that gas transmission operations will be thus fully unbundled from Naftogaz group.

The new TSO has applied for certification to the national regulator. The company also submitted the draft secondary legislation necessary to complete the unbundling procedure to the Ministry of Energy and Environment. Naftogaz said.

Previous Who Are the Nobel Prize Winners This Year?
Next Russian Investors Eyeing Saudi Aramco Listing