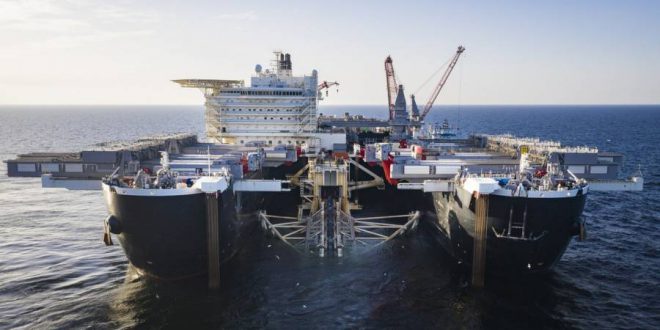 The US sanctions slapped on a controversial Russian gas pipeline to Europe will likely delay the project by several months but it will still be completed next year. a top German official said Monday.

`But I expect the pipeline to be finished in the second half of 2020.` he told German public radio Deutschlandfunk.

The Nord Stream 2 pipeline was initially slated for completion in early 2020 with a view to being operational in mid-2020.

Moscow likewise insisted the US sanctions would not derail the project as it threatened Washington with retaliation.

`Such sanctions are unacceptable for us. and we are confident that such measures won`t prevent finishing the construction of such an important project.` Kremlin spokesman Dmitry Peskov told reporters.

`In any case. we won`t leave such steps unanswered.` he said.

`As to when and how this will be done. this will depend on Russia`s national interest.`

Both Moscow and Berlin have reacted furiously to the sanctions imposed by Washington on Friday over the 9.5 billion euro ($10.6 billion) pipeline under the Baltic Sea.

The American announcement of asset freezes and visa bans targeting companies involved in the project immediately led to Swiss pipe-laying contractor Allseas halting its work on the remaining stretches.

But Beyer said `alternative` solutions could be found to finish the project that would however `cause delays and be more expensive`.

He also reiterated Germany`s criticism of the US move. saying `that`s not how you treat friends`.

Merkel`s spokeswoman Ulrike Demmer at the weekend slammed the sanctions as `an interference in our internal affairs`.

The United States has long opposed Nord Stream 2. saying the pipeline would give Russia too much influence over security and economic issues in western Europe.

The project aims to double Russia`s natural gas deliveries to Germany and is set to transport 55 billion cubic metres of gas to Europe`s top economy per year.

It would also allow Russia to reroute supplies from overland pipes running through Ukraine. with Kiev expressing concerns this would deprive them of vital leverage over its giant neighbour.

Some critics however have pointed out that Washington`s resistance to Nord Stream 2 comes as the US is trying to sell more of its liquefied natural gas (LNG) to Europe.

More than 80 percent of the Nord Stream 2 project has already been completed. half of it financed by Russia`s state-owned Gazprom and half by five European companies.

The European Union has joined the chorus of condemnation over the US penalties. saying the bloc opposed `sanctions against European companies engaged in legal activities`.

But the project has divided the EU. with Poland and some Baltic nations also viewing the pipeline with suspicion over fears Moscow could use it to exert political pressure.

In Berlin. Merkel`s spokeswoman Demmer said `further discussions are being held` with different parties to find a solution.

`And we will continue to express our view that we don`t condone such extra-territorial sanctions.` she added.