Oil Prices Down with Virus Rebound and Libya Risks

Brent oil was down during early trading on Monday with the growing coronavirus outbreak pressuring demand and threatening global growth while supply risks from Libya continue.

Last week. Brent climbed to as high as $60 per barrel on Thursday. while WTI soared to as much as $54.50 a barrel. to both mark their highest levels since Jan. 29. according to official data.

With five oil-exporting ports in Libya remaining non-operational. the country has been brought to the brink of a complete production shutdown.

The oil rig count in U.S. increased this week. according to the latest data released Friday by oilfield services company Baker Hughes.

The number of oil rigs. an indicator of short-term production in the country. rose by one to reach 679 for the week ending Feb. 21. from 678 the previous week.

This marked the third week in a row that the oil rig count in the U.S. showed an increase.

However. the oil rig count in the country is still 20.4% down year-over-year. having totaled 853 during the same period last year. 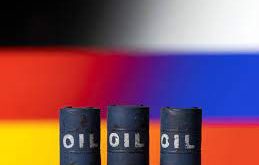