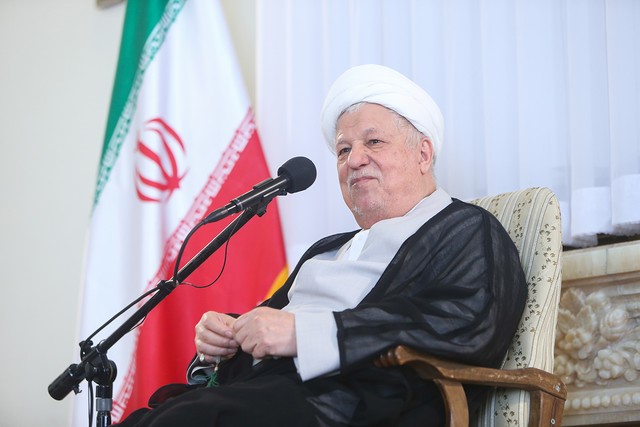 The Commander of Reconstruction passed away

Chairman of the Expediency Council Ayatollah Akbar Hashemi Rafsanjani has passed away at the age of 82 due to heart condition.
Born on August 25. 1934. the influential Iranian politician and writer was the fourth president of the Islamic Republic. serving from 1989 to 1997.
Rafsanjani was the head of the Assembly of Experts from 2007 to 2011. The influential cleric was elected chairman of the Iranian parliament in 1980 and served until 1989. He assumed office as the Chairman of the Expediency Council in 1989.
Ayatollah Hashemi Rafsanjani was among the main aides to late founder of the Islamic Republic. Imam Khomeini.
He played an influential role both during anti-Shah struggles before the victory of the Islamic Revolution and afterwards through various stages of the establishment of the Islamic Republic of Iran.
Rafsanjani was also a key figure during the eight years of Iraq’s imposed war on Iran (1980-88). serving as substitute to commander-in-chief of the armed forces.
Rafsanjani took a dim view of state control of the economy — even in the turbulent years after the Islamic Revolution — and encouraged private businesses. development of Tehran`s stock market and ways to boost Iranian exports.
He built roads and connected villages to electrical. telephone and water networks for the first time. earning the title of Commander of Reconstruction by his supporters.
He also oversaw key developments in Iran`s nuclear program by negotiating deals with Russia to build an energy-producing reactor in Bushehr. which finally went into service in 2011 after long delays.
In a statement. Ayatollah Khamenei called Rafsanjani an old friend and close colleague who demonstrated “unique intimacy” and “enormous intelligence” during 59 years of their relations when they followed a “common path” despite differences. “With the loss of Hashemi. I do not know anyone else with whom I have such a common experience for such a long time during the ups and downs of this historical period.” he added.
Iran`s President Hassan Rouhani issued a condolence message on his Twitter account soon after Ayatollah Hashemi Rafsanjani’s demise in which he said. “The soul of the great man of the revolution and politics has soared to the sky.”
Ayatollah Seyyed Mahmoud Hashemi Shahroudi also released a message. expressing his grief over passing away of Ayatollah Hashemi Rafsanjani.
Many Iranian officials and state organs have offered their condolences over the demise of Ayatollah Rafsanjani.
The funeral for Ayatollah Hashemi Rafsanjani will be held in Tehran on Tuesday.