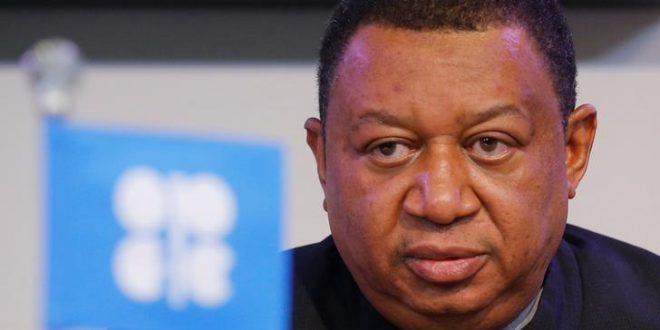 OPEC Secretary-General. Mohammad Sanusi Barkindo and his accompanying delegation. took part in the 3rd GCC Petroleum Media Forum held in Abu Dhabi on 19th and 20th April under the auspices of President His Highness Sheikh Khalifa bin Zayed Al Nahyan.
Mr. Barkindo delivered a keynote speech at the forum in which he reviewed the achievements of the production adjustment decisions taken in Vienna at the 171st Ordinary Meeting of the OPEC Conference on 30th November 2016. and at the OPEC/non-OPEC meeting on 10th December 2016 by OPEC’s 13 Member Countries. who were then joined by 11 participating non-OPEC nations.
For February. conformity to the adjustment stood at 94 percent. which was eight percentage points higher than the January figure. which was already. in itself. impressive. he said. He added that conformity for March is expected to be more than the February figures.
In his speech. the Secretary-General also thanked Suhail bin Mohammed Faraj Faris Al Mazrouei. the UAE`s Minister of Energy. for His skillful. persuasive and constructive engagements during the intensive negotiations that paved the way for last year’s historic decisions. I am indeed very confident our collective action will continue to prove effective and bring us the results we are seeking.
After the Secretary-General’s speech. a video was shown showcasing the first phase of the Oil and Gas Big Data Project. a joint initiative of the OPEC Secretariat and the UAE Ministry of Energy. The project is aimed at developing a comprehensive. multi-dimensional and easy-to-use tool for analysing publicly available oil and gas data. According to the presentation. the project will have the capacity to display raw figures. compare time series between countries. and flows and products. The results of the first phase of the project are expected to be presented during the Abu Dhabi International Petroleum Exhibition and Conference. ADIPEC. which runs from the 13th – 16th November. 2017.

Previous India Replaces Japan as No. 2 LPG Importer
Next Iran to Pursue US Lack of Commitment Toward JCPOA