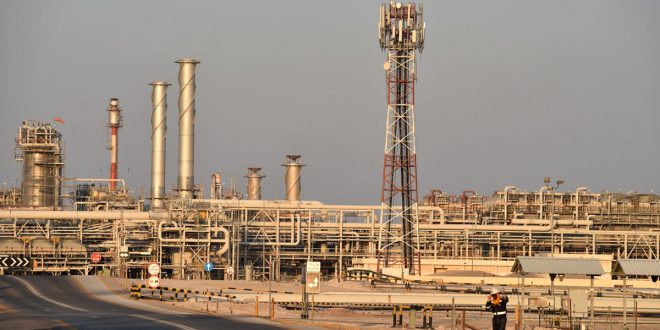 (FILES) In this file photo taken on September 20, 2019 a general view of Saudi Aramco's Abqaiq oil processing plant is seen on September 20, 2019. - The United States said on March 25, 2020 it has urged Saudi Arabia to "reassure" oil and financial markets as the world grapples with a coronavirus pandemic that has paralyzed major economies.The appeal was made by Secretary of State Mike Pompeo in a telephone conversation Tuesday with Crown Prince Mohammed bin Salman, the State Department said. (Photo by Fayez Nureldine / AFP)

One of Libya’s state oil producers said it would have to cut as much as 100,000 barrels a day of output this week, a further sign that a budgetary crisis is threatening the OPEC member’s energy industry.
Sirte Oil Co. will be forced to “reduce production and halt it completely within 72 hours,” the company said in a statement Thursday to its parent, the National Oil Corp.
The eastern-based firm blamed its “very critical financial situation, the inability to fulfill contractual obligations to contractors, accumulation of debts and the lack of spare parts, fuel and chemicals required for the operations.”
Sirte Oil is the second Libyan company that’s had to slow production in the past week because of a lack of funding to maintain fields and pipelines. Arabian Gulf Oil Co. cut output by roughly 90%, or 280,000 barrels a day.
The NOC on Monday suspended exports from the key eastern port of Hariga, citing the central bank’s failure to release money to the energy sector. It warned that more companies would follow suit.
The disruptions have caused Libya’s overall crude output to fall below 1 million barrels a day for the first time in months.
The budget dispute risks derailing Libya’s oil recovery following a truce in the nation’s civil war around mid-2020. Crude output surged from almost nothing from September and reached 1.25 million barrels a day last month, the highest level in eight years.