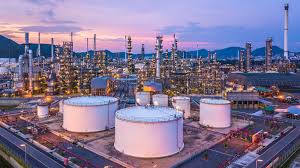 Saudi Aramco is in early talks about further staggering payments for a controlling stake in local petrochemical giant Saudi Basic Industries Corp. as the collapse in oil prices puts pressure on its finances.
State-owned Aramco is weighing pushing out payments for the 70% holding in the petrochemicals maker and reducing the size of the initial installment to the Saudi Arabian sovereign wealth fund, known as the Public Investment Fund, according to people with knowledge of the matter.
The oil giant is also weighing whether it’s possible to reduce the $69.1 billion price tag on the deal, one of the people said, asking not to be identified because the information is private. The talks are in early stages and it’s unclear whether an agreement will be achieved, the people said.
The company is seeking to preserve cash as it confronts a historic rout in crude prices and a burgeoning list of spending obligations. It reaffirmed a commitment to pay $75 billion in dividends this year, while in March it pledged to cut capital expenditure to save cash.
Third Restructuring
Aramco and the PIF have already restructured the deal. Under the terms of the current agreement from October, Aramco is set to pay a third in cash, down from half previously. The deadline for paying the rest was extended by four years until September 2025. The initial pact involved Aramco paying 123.4 riyals ($32.85) a share for Sabic, whose share price has slumped to 71.7 riyals since that was agreed in March 2019.
A representative for Aramco said it doesn’t comment on rumor or speculation. A representative for Sabic said the matter is between the oil producer and the PIF. A representative for the sovereign wealth fund didn’t immediately respond to requests for comment.
On Sunday, Reuters reported that Aramco is looking to restructure the deal, citing people familiar with the matter.
Raising Cash
The acquisition of Sabic is a key part of Aramco’s strategy of moving downstream from oil production into chemicals. It will also serve as a way to help the PIF raise cash to fund its investment plans. With crude prices down more than 50% since the start of the year, Aramco is looking at alternatives to raise funds.
The company has hired JPMorgan Chase & Co. to review the potential multibillion sale of a stake in its oil pipelines, people familiar with the matter said in April.
Aramco is set to report its first-quarter results on Tuesday, giving investors an insight into how March’s oil-price war has impacted earnings.