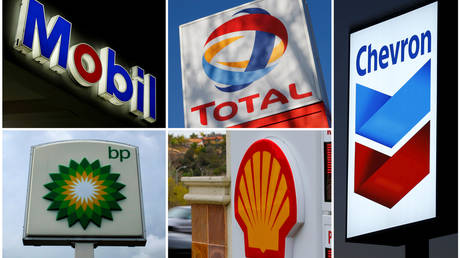 Big Oil majors booked profits of a combined $174 billion for the first nine months of the year as they focused on returning cash to shareholders instead of boosting production to arrest a price rally, The Guardian reported this week, citing a report shared exclusively by Accountable.US, a government corruption watchdog.
According to the information in the report, the 24 biggest oil companies made $74 billion in net profits, with Accountable.US accusing the majors of “taking advantage of bloated prices, fleecing American families along the way.”
“Americans looking for someone to blame for the pain they experience at the pump need look no further than the wealthy oil and gas company executives who choose to line their own pockets rather than lower gas prices with the billions of dollars in profit big oil rakes in month after month,” said Accountable.US president Kyle Herrig, as quoted by The Guardian.
Higher oil prices have pushed retail fuel prices in the United States to multi-year highs, serving a blow to President Biden’s popularity among voters ahead of the mid-term elections next year, prompting the administration to try different tactics to arrest the rally.
Among these were repeated calls on OPEC+ to boost production and threats to investigate illegal conduct by U.S. oil companies seeking to swell prices at the pump.

There is allegedly “mounting evidence of anti-consumer behavior by oil-and-gas companies,” a letter sent by the White House to FTC chairwoman Lina Khan stated last month. “The Federal Trade Commission has authority to consider whether illegal conduct is costing families at the pump. I believe you should do so immediately,” President Biden also wrote in the letter.
Calls on OPEC+ also yielded no results, which was why the Biden administration in late November announced the planned release of 50 million barrels of crude from the strategic petroleum reserve of the country.
The announcement coincided with the news of the latest coronavirus variant, which led to a sharp plunge in oil prices last week before benchmarks recouped some of their losses, despite OPEC+’s decision to add another 400,000 bpd to its monthly total in January, which the White House touted as a victory in its diplomatic efforts.