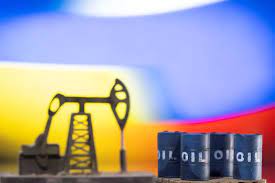 The European Union on Friday once again failed to reach an agreement on a price cap for Russian oil, with the bloc’s eastern-most members including Poland, Estonia, Latvia, and Lithuania objecting that the proposed $60-$70 per barrel for Russian crude is too generous and well above the rates Russia currently sells crude.
European Commission Vice President Valdis Dombrovskis has acknowledged as much, saying, “If you put the price cap too high, it doesn’t really bite. Oil is the biggest source of revenue for the Russian budget, so it’s very important to get this right so it really has an impact on Russia’s ability to finance this war,” he told Bloomberg TV.
Well, they are right: offering $70 per barrel for Russian Urals is incredibly generous, considering that Bloomberg has just reported that China and India are currently getting them for half that price.
According to Bloomberg’s oil strategist Julian Lee, Russia’s flagship Urals crude oil traded at a massive discount of $33.28, or about 40% to the international Brent crude oil, at the end of last week. In contrast, a year ago, Urals traded at a much smaller discount of $2.85 to Brent. Urals is the main blend exported by Russia. The result: Moscow is beginning to feel the heat of its war in Ukraine, and could be losing ~$4 billion a month in energy revenues as per Bloomberg’s calculations.
Washington is not losing sleep over it. “If Russian oil is going to be selling at bargain prices and we’re happy to have India get that bargain or Africa or China. It’s fine,” US Treasury Secretary Janet Yellen previously told Reuters.
Shipping nations like Greece are in favor of a higher price cap that will help keep trade flowing. However, the situation could get even murkier for Russia with EU sanctions on Russian oil set to kick in on December 5, with disruptions to the market expected if a price cap is not in place. Meanwhile, Russia is reportedly drafting a presidential decree that would ban its companies and any traders from selling it to anyone that participates in a price cap.
Surging Imports From Russia
Previously, India was never a big buyer of Russian crude despite having to import 80% of its needs. In a typical year, India imports just 2-5% of its crude from Russia, roughly the same proportion as the United States did before it announced a 100% ban on Russian energy commodities. Indeed, India imported only 12 million barrels of Russian crude in 2021, with the majority of its oil sourced from Iraq, Saudi Arabia, the United Arab Emirates, and Nigeria.
But back in May, reports emerged of a “significant uptick” in Russian oil deliveries bound for India.
According to a Bloomberg report, India spent a good $5.1 billion on Russian oil, gas, and coal in the first three months after the invasion, more than five times the value of a year ago. However, China remains the biggest buyer of Russian energy commodities, spending $18.9 billion in the three months to the end of May, almost double the amount a year earlier.
And, it’s all about the money.
According to the International Energy Agency (IEA), Urals crude has been offered at record discounts since the war began. In the early months after the war began, Ellen Wald, president of Transversal Consulting, told CNBC that a couple of commodity trading firms – such as Glencore and Vitol – were offering discounts of $30 and $25 per barrel, respectively, for the Urals blend.
The experts say simple economics is the biggest reason why White House pressure to curb purchases of crude oil from Russia have fallen on deaf ears in Delhi.
“Today, the Government of India’s motivations are economic, not political. India will always look for a deal in their oil import strategy. It’s hard not to take a 20% discount on crude when you import 80-85% of your oil, particularly on the heels of the pandemic and global growth slowdown,” Samir N. Kapadia, head of trade at government relations consulting firm Vogel Group, told CNBC via email.
Still, it will not be lost on many readers that India has maintained a cozy relationship with Russia over the years, with Russia supplying the Asian nation with as much as 60% of its military and defense-related equipment. Russia has also been a key ally on crucial issues such as India’s dispute with China and Pakistan surrounding the territory of Kashmir.
But hey, India and China are not the only ones to blame here. Reports have emerged that whereas supplies of Russian pipeline gas – the bulk of Europe’s gas imports before the Ukraine war – are currently down to a trickle, Europe has been hungrily scooping up Russian LNG.
Europe has been working hard to wean itself off Russian energy commodities ever since the latter invaded Ukraine. The European Union has banned Russian coal and plans to block most Russian oil imports by the end of 2022 in a bid to deprive Moscow of an important source of revenue to wage its war in Ukraine.
But ditching Russian gas is proving to be more onerous than Europe would have hoped for. Whereas supplies of Russian pipeline gas – the bulk of Europe’s gas imports before the Ukraine war – are down to a trickle, Europe has been hungrily scooping up Russian LNG. The Wall Street Journal has reported that the bloc’s imports of Russian liquefied natural gas jumped by 41% Y/Y in the year through August.
“Russian LNG has been the dark horse of the sanctions regime,” Maria Shagina, a research fellow at the London-based International Institute for Strategic Studies, has told WSJ. Importers of Russian LNG to Europe have argued that the shipments are not covered by current EU sanctions and that buying LNG from Russia and other suppliers has helped keep European energy prices in check.

Previous The Global Energy Crisis is Driving a Surge in Heat Pumps, Bringing Energy Security and Climate Benefits
Next Germany Running on Dwindling Supply of Gas