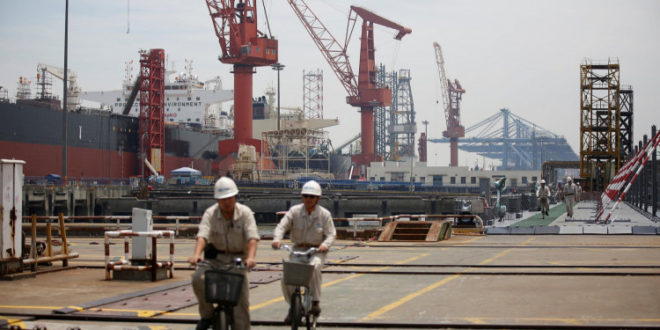 China’s move to speed up the construction of natural gas storage facilities is expected to boost the storage capacity over the next two-three years, but the country is unlikely to meet its 2020 targets amid incomplete market liberalization reforms and coronavirus pandemic, trading sources said.
City gas suppliers have so far shown little interest in building peak-shaving gas storage capacity, as the government had not provided concrete market liberalization incentives to promote their construction, they added.
“Storage construction is a very capital-intensive business. Without a liberalized market and a summer/winter spread to incentivize private investment, no money-driven stockholder will invest in storage,” said a source with a trading house.
“Private investment will also require third-party access to pipelines. Otherwise, you will not be able to use your storage,” the source added.
Domestic gas infrastructure operators were required to open their facilities to all eligible users in June 2019, but no substantial progress has been made so far because of delays in setting up China’s infrastructure operator, the National Pipeline Company, launched in December 2019, market sources said.
“Gas storage and peak shaving projects by China’s National Pipeline Company have been delayed as a result of the pandemic,” said the source with the trading house.
Besides, storage construction is a lengthy process, which involves site selection, safety analysis, project approval, environmental impact assessment, financing, construction, and so on, said a second source in eastern Shandong province.
“Storage capacity is unlikely to be built up in a short time,” the source said, adding that several peak-shaving LNG storage facility projects are still waiting for approval.
“New storage capacities are expected to come online within two to three years,” the source added.
CHINA STEPS UP REFORMS
China’s most recent natural gas liberalization reforms, announced April 14, are likely to speed up the construction of natural gas storage facilities.
The reforms include liberalizing operations of gas storage facilities and allowing independent storage operators to trade gas and set storage fees against market prices, according to a document jointly released by five ministry departments, including the top policy planner — the National Development and Reform Commission — on April 14.
Besides, the government will also provide up to 30% of investment subsidy to developers of emergency gas storage facilities in key areas to ensure an average storage equivalent of three days of gas demand.
The new measures come in response to China’s lagging gas storage construction plans, especially those of city gas suppliers and local governments, NDRC said, without disclosing the country’s current gas storage capacity.
City gas suppliers normally source natural gas from upstream suppliers and sell it to end users via pipelines, based on regulated city-gate prices.
COVID-19 EXPOSES STORAGE DEFICIT
China’s major natural gas importers CNOOC and PetroChina declared force majeure on their LNG and pipeline gas contracts in the first quarter of 2020, which market sources attributed to the country’s insufficient storage capacity.
The pandemic caused a sharp decline in China’s domestic demand in the first quarter and a tank-top situation at many Chinese LNG terminals.
Based on a policy issued September 2018, upstream gas suppliers are required to build storage capacity of not less than 10% of their annual sales by 2020.
Similarly, city gas suppliers are required to build up a peak-shaving storage of not less than 5% of annual sales and local governments an emergency storage capacity of no less than three days of average daily consumption.
As of end-2018, China’s upstream gas suppliers had built up a storage capacity of 14 Bcm, which only accounted for 5% of the country’s natural gas consumption of 280 Bcm in 2018, according to data from NDRC.