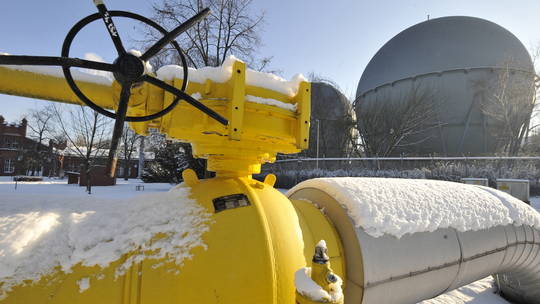 Natural gas prices in Europe edged lower amid rising inventories and signs of reduced demand, while supplies from Russia remain steady, albeit low.
Benchmark futures erased earlier gains, though they’re still trading near their highest levels since early March, during the first weeks of Russia’s invasion of Ukraine. Prices rallied last week as state-run Gazprom PJSC curbed flows on the key Nord Stream pipeline to Germany to about 20% of capacity.
Europe is racing to stockpile the vital fuel before the winter as it seeks to limit the economic damage from the supply crunch caused by Russia’s curbs. Nations are lining up alternative supplies and infrastructure to import more liquefied natural gas, and storage sites are now about 70% full, in line with the five-year average.
The storage injection rate remains “the bright spot” for the market, said analysts at Alfa Energy Ltd.
Russia has cut supplies amid heightened regional tensions following its invasion of Ukraine. State-run Gazprom PJSC has said technical issues like missing paperwork and turbine maintenance have forced it to slash Nord Stream flows, and the return of one of the machines – stuck in transit after sanctions-related delays – should improve the situation.
German Chancellor Olaf Scholz reiterated Wednesday that there are no hurdles on Germany’s side to send the repaired turbine to Russia, laying blame on Moscow for delays and curtailed supplies.
Disruptions to Russian exports are a constant threat, Scholz said, after viewing the part at a German facility of its producer, Siemens Energy AG. The company added that dialogue continues with Gazprom on the equipment.
While technical issues with Nord Stream’s entry point in Russia are real, the supply cuts are meant to pressure the European Union over sanctions and its support for Ukraine, according to Kremlin insiders.
Russian gas shipments through Ukraine, a major transit route to Europe, have been also curbed over the past two months.
The Dutch front-month gas contract, the European benchmark, slipped 1% to 203.01 euros per megawatt-hour in Amsterdam. The UK equivalent traded 3.1% higher.
The market is also focusing on demand destruction in Europe, given the surging costs. In July, industrial gas use dropped by 19% year-on-year in the region and 24% in Germany, according to analysts at Morgan Stanley.
“Further demand destruction is required, as well as continued high LNG imports, to offset the recent decline in Russian imports,” they said in a research note Tuesday. Morgan Stanley expects Dutch gas at about 209 euros in the third and fourth quarters.
Germany, Europe’s biggest economy, has already allowed the revival of mothballed coal-fired power plants, and Scholz said Wednesday the government is talking to utilities about the capacity that could be brought back. Extending the life of nuclear plants could also “make sense,” he said, adding that he’s awaiting study results before a decision is made.
Some gas projects in Europe, which were supposed to add supplies, are facing hurdles.
A local unit of TotalEnergies SE said on Wednesday that the first gas from the redeveloped Tyra field in the Danish North Sea will be delayed until the 2023-24 winter season due to manufacturing and supply chain disruptions.
Tyra was expected to be back online next summer. Gazprom halted supplies to Denmark in June due to not receiving payment for the fuel in roubles.

Previous Can Libya Regain its Reputation as a Reliable Oil Nation?
Next US Boost Its LNG Supplies to Europe amid Ukraine War