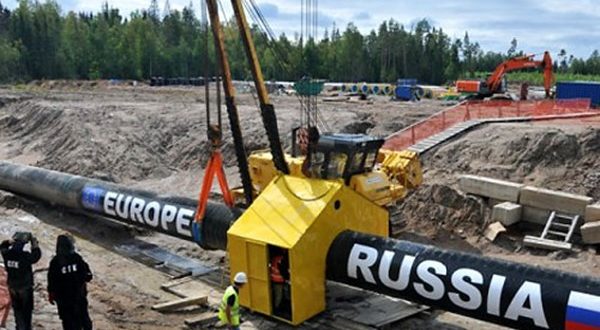 Germany won’t need additional gas flows this season, giving Chancellor Angela Merkel and Russian President Vladimir Putin another reason to bide their time on the controversial Nord Stream 2 pipeline.
After two warm winters and the coronavirus pandemic, demand for the fuel used for heat and power generation is sagging across the continent. Supplies remain abundant, with U.S. cargoes of liquefied natural gas returning to Europe. Benchmark gas prices remain below their 10-year average at the start of the period for peak consumption.
Those metrics may inform how Putin and Merkel respond to Poland’s decision last week to slap a record $7.6 billion fine on the pipeline’s sponsor, Gazprom PJSC. Berlin was silent on the matter, and Russia said only that Poland aligned itself with the U.S. on the issue. For now, there’s no reason to rush ahead with the long-delayed 1,230-kilometer link under the Baltic Sea.
“There is no urgency now for Nord Stream 2 as the existing pipelines and LNG should provide enough gas for the months to come,” said Richard Morningstar, founding chairman of the Atlantic Council’s Global Energy Center and a former U.S. ambassador to the European Union.
Nord Stream 2 will run parallel to an existing pipeline by the same name and will double capacity of the route from Russia under the Baltic Sea into Germany. Merkel allowed it to go ahead as a commercial project that would shore up fuel supplies to heavy industry including BASF AG. Russia and Gazprom started promoting the link in 2012, saying additional flows will be needed needed by the mid-2020s.
The U.S. has opposed the pipeline from the start, saying it will deepen Europe’s dependence on energy supplies from Russia. Those arguments gained traction when Putin ordered the invasion of Crimea in 2015, after meddling in the 2016 U.S. election and again in August because of the poisoning of Russian opposition leader Alexey Navalny.
President Donald Trump has been an increasingly vocal critic of Nord Stream 2, but the issue faded from the political spotlight until Poland’s intervention. Neither Germany nor the pipeline’s promoters have an interest injecting the issue into the U.S. presidential election, which culminates with voting on Nov. 3. And with construction on the link frozen anyway, Poland’s intervention is irrelevant to the question of when work might be completed.
“For the next few weeks, nobody in Washington cares about anything else than internal politics,” said Wayne Merry, senior fellow for Europe and Eurasia at the American Foreign Policy Council in Washington.
There’s no urgency for Germany and Russia to resolve the matter, maybe for months or years. Even before the coronavirus pandemic, energy demand was softening following a record warm winter. Lockdowns to control the virus further hit consumption, prompting Gazprom and LNG shippers around the globe to scale back deliveries.
Broader market conditions also have shifted since Nord Stream 2 got financial backing in 2017. The U.S. started exporting LNG in 2016 and has been delivering more cargoes to Europe each year. That added to LNG production capacity coming from other places from Qatar to Algeria and Australia. A new pipeline from the Caspian Sea region through Turkey into Italy is due to open later this year. Those measures have diversified Europe’s fuel supplies and resulted in benchmark prices in the region dropping to half their peak in 2018.
“EU has been well supplied, as never before, and Gazprom is definitely becoming less powerful,” Jonathan Lamb, oil and gas senior analyst at Wood & Company, a Czech investment bank. “The EU gas market is on the way of diversification.”
The politics of climate change have also changed the market calculus about when Nord Stream 2 will be needed. When the pipeline was planned, natural gas was widely seen as the fuel that would replace coal and sit alongside wind and solar power in Europe’s energy mix. Since then, the cost of renewables plummeted, weakening the case for any fossil fuels. At the same time, there is growing environmental opposition against building new gas infrastructure, especially when Europe is aiming to cut net fossil fuel emissions to zero by 2050.
Germany and Russia are the countries most interested in the project because it will increase gas supply and improve liquidity at the continental trade hubs, in addition to generating profits for energy companies throughout the region. Gazprom owns the Baltic Sea pipeline project. Half of its 9.5 billion-euro ($11.2 billion) cost is being financed by Germany’s Uniper SE, Wintershall AG, Engie, Royal Dutch Shell Plc, and Austria’s OMV AG.
A further delay gives time for markets to adjust to cooler weather and the pandemic’s impact on gas demand. There is a chance that this winter will be much tighter than last year, with La Nina generating below-normal temperatures in Europe, particularly in the fourth quarter, according to Giacomo Masato, an analyst at MarexSpectron.
Europe can cope without Nord Stream 2 flows this winter, but with further economic growth demand may well emerge in the coming years to support the pipeline, according to Julien Hoarau, gas market analyst at Engie EnergyScan. For now, natural gas demand is estimated to stay flat for at least the next five years, according to the International Energy Agency.
“Overall, there’s no physical risk at first glance, but further delays in the delivery of Nord Stream 2 should not be neutral in terms of wholesale gas prices in Europe,” said Hoarau. “We could see a stronger call on storages to balance European gas systems. Higher LNG imports could be required as well.”