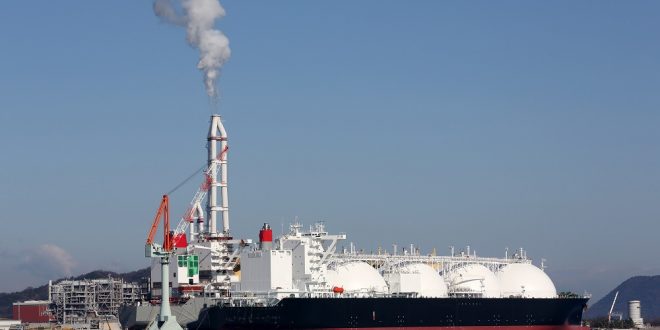 The German state bank KfW and the Dutch utility Gasunie have signed a memorandum of understanding (MoU) on the construction of the first LNG terminal in Brunsbüttel, Germany.
Citing the important role of gas as a transition fuel, Germany’s Minister for Energy and Climate Protection Habeck said the goal was to “reduce dependence on Russian imports as quickly as possible.”
“Russia’s war of aggression against Ukraine at the latest makes this imperative,” Habeck said on Saturday (5 March). A MoU is the first of three contractual stages typical to most large projects.
The LNG terminal will be jointly owned by Germany and the Dutch utility and is a central part of the Zeitenwende (turning point) Berlin is experiencing following the Russian invasion of Ukraine.
The terminal will have an annual regasification capacity of eight billion cubic meters (8 bcm), while German annual imports of Russian gas are estimated to be around 140 bcm.
“The terminal thus increases supply security and contributes to greater independence from pipeline-bound natural gas imports in North-Western Europe,” the German ministry explained.
Habeck said he has already given the gas trader Trading Hub Europe (THE) €1.5 billion to purchase liquid gas on the markets on behalf of Germany.
The vice-chancellor warned on 3 March that losing out on Russian energy imports would threaten “social peace” in Germany and has previously stated that his most important concern was to secure supplies for the coming winter.
The terminal is expected to enter into operations by 2024 at the earliest as multiple domestic and EU hurdles must be overcome before construction can begin.
“The project partners are working to implement the project as quickly as possible, taking into account all licensing and state aid requirements,” the ministry said.
For the critics of the project, the expected entry into service of the terminal makes the project superfluous before it is even finished.
“It remains unclear how a terminal is helpful at all given long construction times,” tweeted Constantin Zerger, energy and climate protection lead at environmental NGO Deutsche Umwelthilfe, adding that 80km of connecting pipelines would have to be constructed as well.
The location in Brunsbüttel “is particularly problematic because of its proximity to nuclear facilities,” he said.
To alleviate environmentalists concerns and to placate the Greens, who are the second largest party in the federal government, there are plans to “convert the terminal for the import of green hydrogen derivatives such as ammonia” in the future.
While environmental NGOs are sceptical of the plans, the uppermost echelons of the German coalition consider it to be an essential step as part of the country’s Zeitenwende following the invasion of Ukraine.
During his 27 February address to the German parliament, Chancellor Olaf Scholz vowed to “change course in order to overcome our import dependency.” This would be achieved through additional renewable energy, strategic storage of gas and coal, and revival of the shuttered plans to build LNG terminals.
The announcement of the MoU was welcomed by Scholz’s state secretary and right-hand man, Jörg Kukies, who tweeted that Germany was “getting serious about energy independence.”
But while LNG terminals would reduce the country’s dependence on Russian gas, the biggest probable exporters come with their own issues.
So-called “freedom gas” from the US comes from fracking, a destructive chemical drilling method accused of polluting groundwater that is outlawed in Germany. Meanwhile, gas from the Middle-East usually comes from Qatar, a country where human rights violations run rampant and are often decried by German civil society.

Previous U.S. Says Russian Oil Import Ban on the Table in Talks with EU
Next US, Venezuela Hold Talks on Oil Exports to Replace Russia’s