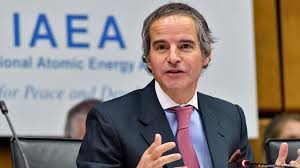 Director General of the International Atomic Energy Agency (IAEA) Rafael Grossi flew to Tehran on Saturday to conduct talks on further verification activity at Iranian nuclear objects, Russian Permanent Representative to International Organizations in Vienna Mikhail Ulyanov reported.
“Today IAEA Director General Rafael Grossi flew to Tehran to specify parameters of the agency’s inspection activity in Iran in light of a new Iranian law which substantially restricts it. We wish successful negotiations to both sides,” he wrote on his Twitter page.
As Grossi stated on Friday, he is counting on a successful result of his visit to Iran where he is going to discuss the verification activity at nuclear objects in this country in relation to the new law becoming effective which suspends the use of the additional protocol with the agency. On Monday, Iran notified the IAEA of the enforcement of the parliament’s law on restricting the volume of inspections in this country beginning on February 23.