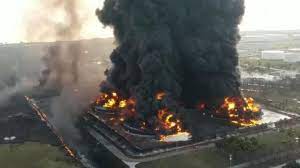 Indonesia’s Pertamina said March 29 that an incident has caused a fire at its Balongan refinery in the province of West Java, but the national oil company said its fuel supply was not affected.
The fire occurred at Balongan refinery’s T-301G tank and the incident occurred at 12.45 am local time, Pertamina said.
“The incident has led the company to carry out a normal shutdown [at] the refinery to control the crude flow and to prevent the fire from expanding,” the corporate secretary of Kilang Pertamina Internasional, Ifki Sukarya, said in a company statement released March 29.
Pertamina and the Indonesian police are still investigating the cause of the fire, according to the company statement. Four residents who were passing the refinery suffered burns and were taken to the hospital.
However, the company assured that fuel supply remains unaffected and “still normally operated.”
The Balongan refinery has a capacity of 125,000 b/d and is located in West Java. Kilang Pertamina Internasional is the company’s refinery and petrochemical subholding.