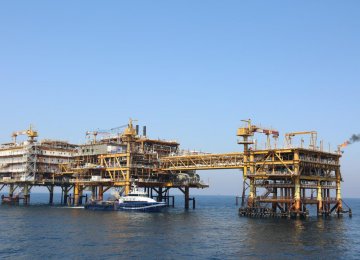 Iran has completed 13 phases of South Pars Gas Field (SPGF) in the past seven years to bring the country’s production of natural gas to 700 million cubic meters from this field.
Development of South Pars Gas Field has been among the top priorities of the Ministry of Petroleum.
Seven years ago Iran produced 275 million barrels of natural gas a day while Qatar’s production was 570 cubic meters.
According to Bijan Zangeneh, Iran’s minister of petroleum, Iran’s productions has surpassed that of its southern neighbor.
Iran has completed 17 phases of the huge project and only one small refinery is left till the ultimate completion of the entire project.
Since 2013, Iran has increased natural gas production of the country by almost 50% and production of the SPGF by 150%.
In the past seven years, Iran has completed phases 15, 16, 12, 19, 20, 21, 17, 18, 13, 22, 23, and 24 and the sea part of phase 14. Iran’s production has for the first time exceeded 1,000 million cubic meters a day.
South Pars is the biggest gas field in the world and energy capital of Iran. It is also the pole of the country’s non-oil, petrochemical, and liquefied gas export.