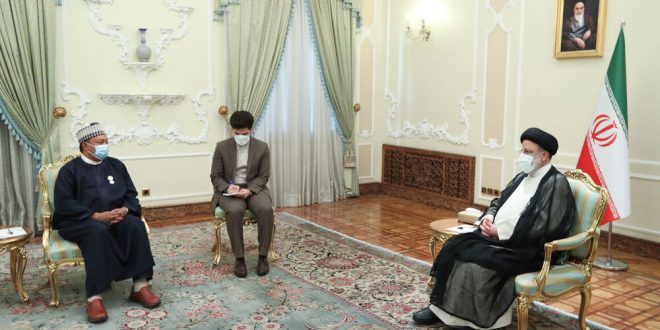 New Iranian President Seyed Ebrahim Raisi hosted a meeting with the Secretary-General of the Organization of the Petroleum Exporting Countries (OPEC) Mohammad Sanusi Barkindo in Tehran on Friday, Shana reported.
Barkindo briefed Raisi on the condition of the global oil market and emphasized the significant role of the Islamic Republic of Iran as one of the founders of this organization which has always played a key and constructive role in the oil market.
In the meeting, Raisi also referred to the efforts of some powers to weaken the position of OPEC and noted that the OPEC secretariat should consider the rights and interests of its members as the basis for adopting all measures and mechanisms.
“The Islamic Republic of Iran, as an effective member of OPEC, emphasizes on promoting the global position of this organization and promoting its role in managing the global energy market,” he stated.
Congratulating the 60th anniversary of OPEC establishment, Raisi expressed hope that the organization would become more active and constructive in the future and the members would be more coordinated and cooperative.
“The OPEC Secretariat should play a more active role for coordinating between member and non-member countries,” the president stressed.
Iran completely ready to return to oil market
On the same day, Barkindo also met with the outgoing Iranian Oil Minister Bijan Namdar Zanganeh to discuss the oil market and the possibility of Iran’s return to the market.
Speaking in this meeting, Zanganeh noted that after the re-imposition of U.S. sanctions Iran was robbed of its right for exporting two million barrels per day (bpd) of oil which would equal about $120 billion of revenues.
The minister expressed Iran’s complete readiness for returning to the oil market after the U.S. sanctions are lifted.
He further underlined the critical role that OPEC plays in the global economy, saying: “OPEC is the only third world economic organization that is influencing the world’s economic interactions.”
The key concept that OPEC has been able to act on and succeed in, has been cooperation among members despite rivalry and political differences, as we saw in the recent meeting.
Barkindo for his part praised Zanganeh’s positive work and actions during his tenure, adding: “We hope that Iran will continue to play a key and important role in OPEC and the oil market.”