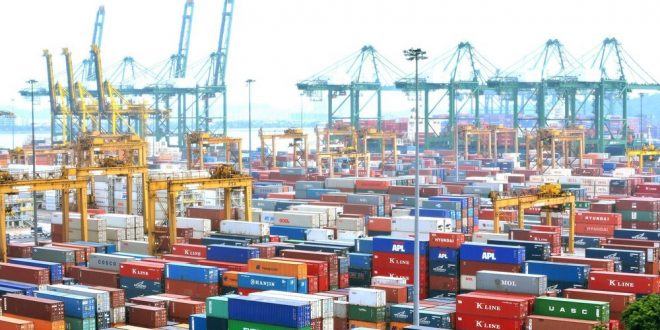 The value of Iran’s non-oil trade rose 38 percent during the first five months of the current Iranian calendar year (March 21-August 22) as compared to the same period of time in the past year, the head of the Islamic Republic of Iran Customs Administration (IRICA) announced.
Speaking to the press on the sidelines of the Industry, Mining, and Trade Minister Ehsan Khandouzi’s visit to the Imam Khomeini Airport City’s customs on Saturday, Mehdi Mir-Ashrafi said that Iran has traded 59.3 million tons of non-oil products worth $34 billion with other countries in the mentioned period, which indicates also 14 percent growth in terms of weight on an annual basis.
The official put the five-month non-oil exports at 45.5 million tons valued at $17.661 billion, with a 63 percent rise in value and 20 percent growth in weight.
The IRICA head mentioned methanol, natural gas, polyethylene, semi-finished iron products, iron ingots, gasoline, liquefied propane, iron rods, urea, and bitumen as the main exported products in the said time span.
He said major export destinations of the Iranian non-oil goods were China with about 12.3 million tons worth $5.9 billion, Iraq with 12 million tons worth $3.163 billion, the United Arab Emirates (UAE) with five million tons worth $1.9 billion, Turkey with 1.375 million tons worth $1.1 billion, and Afghanistan with 2.165 million tons worth $885 million.
The official further announced that Iran has imported 13.8 million tons of non-oil commodities worth $16.631 billion in the first five months of the present year, with a 21 percent growth in value and a 0.5 percent fall in weight year on year.
According to the official, the country’s trade balance was over $1 billion positive in the mentioned five months.
Mir-Ashrafi named cellphones, livestock corn, sunflower oil, barley, meal, wheat, soybeans, sugar, and rice as the main imported commodities.
The United Arab Emirates with 4.436 million tons of goods worth $5.391 billion was the top exporter to Iran in the said period, followed by China with 1.1 million tons of goods worth $3.6 billion, Turkey with 1.578 million tons worth $1.8 billion, Germany with 431,000 tons worth $668 million, and Switzerland with 692,000 tons worth $572 million, the official stated.
He has put the weight of non-oil trade at 146.4 million tons and said that the figure shows a 25-million-ton annual decline, which is the result of sanctions and coronavirus pandemic.
The official also noted that over 4.727 million tons of goods were transited through Iran in the said period, registering a 95-percent rise compared to the same period in the previous year.