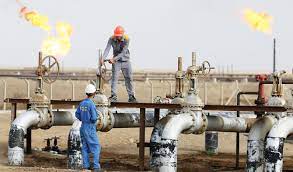 Oil firms operating in Iraq’s southern oilfields might face penalties from the state for pollution violations, a senior official at the Ministry of Environment said on Sunday.
In a press release he issued earlier today, the head of the Environmental Protection Directorate in the southern territory, Walid al-Mousawi, said that the oil firms are legally obliged to treat the pollutants emanating from the production and exploration operations by deploying advanced technology.
“The Ministry has notified the companies committing those violations,” he said, “a roster of the companies’ names will be publicized after taking strict measures against them.”
Field teams will continue to conduct inspection tours in the sites of those companies, he concluded.
Basra, in the far south of Iraq, is known for its oil reserves. For years now, the governorate has been plagued by a” health crisis” of illnesses and injuries associated with water, air, and soil pollution, decades-old land mines, and the rise of cancer cases.
Iraq is one of the most vulnerable countries to the effects of climate change. However, it is also one of the biggest polluters. In fact, it is the world’s second-worst offender, according to the World Bank, contributing roughly 10 percent of the global flaring greenhouse emissions.