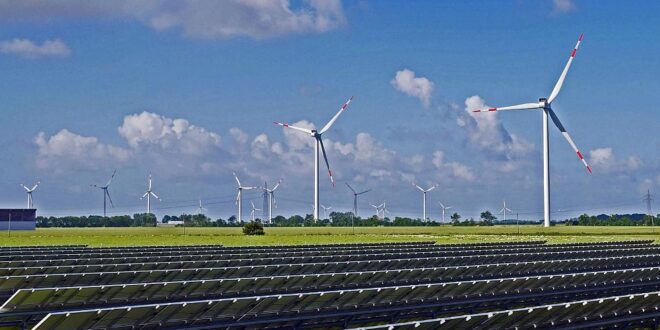 The government is investing in clean energy, in addition to gas and LNG, to become energy independent and become the energy hub of Europe.
Prime Minister Giorgia Meloni (Brothers of Italy/Ecr) told voters before the general election on 25 September that she wants to make Italy, particularly the south, an “energy hub of Europe” by investing in “structural solutions” to achieve primarily complete energy independence.
“With a little intelligence and resources well spent, we could make the South the energy supply hub of Europe,” she said, adding that gas piplines “and then renewables” were on the table.
“Next year, there will be a boom in renewable energy,” Gianni Silvestrini, scientific director of the Kyoto Club, told EURACTIV Italy on Tuesday. “Already this year, we will have about 3000 megawatts more; the results are coming. We must run and produce between 7000 and 8000 megawatts of clean energy per year,” he said.
On 5 October, the Italian government approved the favourable environmental compatibility of eight projects for power implants fuelled by renewable energy sources, with a capacity of 314 megawatts.
Many more are in the process of being approved, both for solar energy, which, according to Silvestrini, is a priority in Italy, along with wind and geothermal energy.
“Innovative solutions exist today, thanks to new technologies, that will facilitate the transition to renewable energy,” Silvestrini explained.
From 2014 to 2021, Italy’s share of renewable energy amounted to around 38%, and, due to the drought and the subsequent collapse of hydroelectric power production, the percentage will decrease this year.
However, “in the coming years, it will grow exponentially” if the roadmap initiated by the Draghi government and now in the hands of the Meloni government is followed.
To meet Europe’s climate targets of zero emissions by 2050 and gain independence from foreign, particularly Russian, gas, Italy will have to grow its renewable energies enormously.
In addition to its own energy needs, the Italian government aspires to be an energy hub for Europe and, thus to export energy to other member states and beyond.
Within the next decade, “Italy will have a large production of clean energy, and it will be necessary to engage in energy exchanges with other European countries”, Silvestrini said, explaining that depending on the seasons and the resulting amount of energy produced, Italy will be able to export and import as needed.